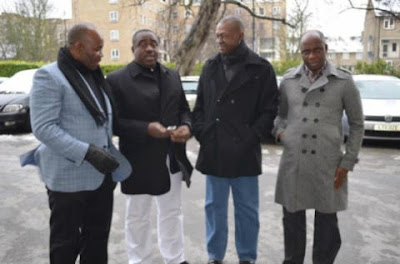 Governors' Forum Members; Godswill Akpabio of Akwa Ibom, Gabriel Suswam of Benue, and Rotimi Amaechi of Rivers State visited ailing governor of Enugu state, Sullivan Chime in London. The photo was released today but it's not clear when it was taken.
Governor Sullivan Chime has been missing from Enugu State since September 2012.

Posted by Connoisseur at 12:52