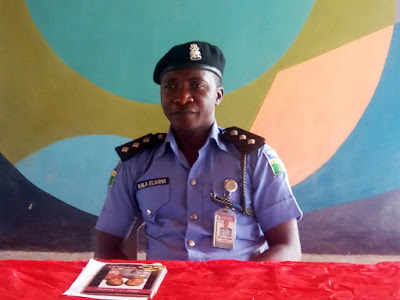 The Akwa Ibom State Command of the Nigerian Police Force has a new Public Relations Officer. He is DSP Bala Elkana. He replaces DSP Chukwu Ikechukwu.
According to his profile exclusively obtained by CONNOISSEUR, Elkana has a Bachelor’s Degree in Law (LLB), M.Sc in Peace Studies and Conflict Resolution. He is an active member of the Nigerian Institute of Public Relations and International Association of Chiefs of Police, amongst others.

A community policing expert, DSP Elkana won’t be new to the job of speaking on behalf of the force as he once served as PPRO in the Niger State Command. On arrival in Akwa Ibom, he assumed duties as OC Community Policing before his new role.
Meanwhile, the immediate past PPRO, DSP Chukwu Ikechukwu will assume office as the Divisional Crime Officer (DCO), B Division, Ewet Housing, Uyo.
DSP Chukwu Ikechukwu, a graduate of Economics from the University of Uyo took over from ASP Cordelia Nwawe as the force’s spokesperson in March. Before his deployment as the PPRO, Ikechukwu was the Divisional Crime Officer ‘A’ Division Wellington Bassey Way, Uyo.


The posting takes immediate effect and they are to report to their new offices on Monday, CONNOISSEUR reports.
Posted by Connoisseur at 10:34