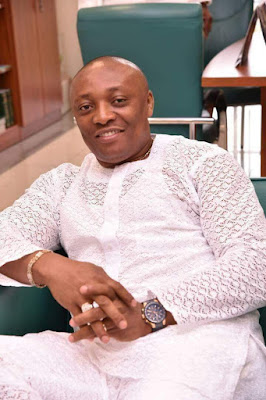 Ahead of his defection to the APC with Senator Godswill Akpabio this week, the House of Representatives member for Abak\Etim Ekpo\Ika Federal Constituency of Akwa Ibom State, Rt. Hon. Emmanuel Ekon, has berated governor Udom Emmanuel’s handling of security crises in parts of the State, noting that the administration under him was a disappointment to the electorate who voted him in 2015.


This followed the sacking of hundreds of local residents in two Local Government Areas of the State (Etim Ekpo and Ukanafun) by militants who, according to Ekon, have led to the killing of no fewer than 150 people including security agents as well as the destruction of properties worth millions of naira.

Speaking today (Sunday) in an interview in Uyo, the State capital, against the backdrop of the governor’s visit to the area at the weekend - to drop relief materials to the displaced residents, Ekon, described the action as belated, given the fact that “the crises have seriously devastated the affected communities for over two years”.

He expressed surprise that “the governor, who had earlier ignored the early indications that the crises could be politically arranged, has turned round to admit the involvement of politicians in the sponsorship of security infractions in the affected Local Governments”.

He, therefore, challenged governor Emmanuel to name the sponsors, if he was sincere in his utterances at the Utu Etim Ekpo secretariat, where he admitted the crises were being sponsored.

“If the governor has suddenly realized that the crises were being sponsored, he (the governor) should stop blaming the female folks in the area who he accused of secretly volunteering information to the militants to attack the communities, but should name those he said were the sponsors because, even if he mentioned me, I am prepared to face the Police.

“He should not forget that this the problem I took it upon myself to fight a year ago, so if he has realized that the crises are being sponsored, then he should come up with the names, instead of coming to Etim Ekpo and Ukanafun to campaign with his so called relief materials under the pretext of sympathizing with the displaced people.

“I am not satisfied with the way the governor is handling security crises in Etim Ekpo and Ukanafun because last year, I had a petition to my office by the affected communities.  Because we were on recess, I had to instruct that the document be forwarded to the Inspector General of Police (IGP), who set up a committee to investigate and ensure lasting peace return to those places.

“Unfortunately, those efforts did not see the light of the day because my brothers including the Local Government Chairman, Hon. Udeme Wilson Eduo and the PDP National Legal Adviser, Hon. Emmanuel Enoidem, deceived the governor to believe that such investigation was politically motivated; that there were no such security issues in my Local Government.

“What surprises me is that after one year that I took that action, the governor has suddenly realized that there are serious security crises in  Etim Ekpo and Ukanafun. Because of the fact that the governor has continued to rely on these same group of people, we have not been able to achieve much in the ongoing war against insurgency in the affected areas.

“And just three days ago, the governor reluctantly visited the affected communities with trucks of relief materials and handed them over to the same politicians to share to the victims, without delivering them to the agonized and displaced persons. In fact, he did not come for the victims; he came to campaign with the materials for his re-election in 2019”, Ekon explained.

According to the lawmaker, who chairs the House of Representatives Committee on Local Contents, “if Udom was sincere, he would have taken the materials to the over 2,000 displaced persons at their IDP camp in Iwukem, instead of handing them to the politicians to share”.

Ekon is expected to join Akpabio in APC as his chances clinching the PDP ticket for a third term are slim.