RT.HON.SAMUEL IKON: 12 YEARS OF LEGISLATIVE SERVICE TO HIS PEOPLE 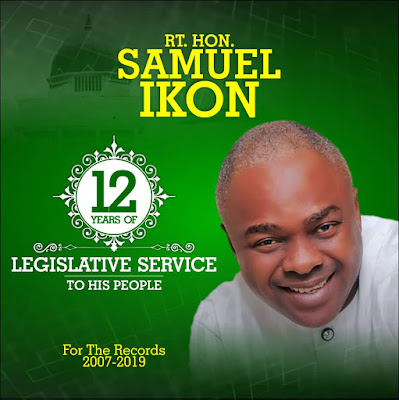 RT.HON.SAMUEL IKON: 12 YEARS OF LEGISLATIVE SERVICE TO HIS PEOPLE

The duties of a legislator is to make laws and effectively represent the people, who gave out the mandate. The legislative journey of Rt.Hon.Samuel Ikon started in  2007,when he was elected into the 4th Akwa Ibom State House Assembly to represent Etinan State Constituency.


He was reelected in 2011, for a second term where he rose to become the speaker of the 5th Assembly. As a representative of his people ,effective service delivery is his watch word. He embarked on several life touching projects and activities to deliver dividends of democracy to his people.

PROVISION OF WATER SCHEME TO COMMUNITIES


CONSTRUCTION AND RENOVATION OF SCHOOLS FOR COMMUNITIES

(38.) Construction of Civic center and Library at  Mbioto 2, South 4

(40.) 25 Surgeries done and over 250 glasses provided for those with visual impediments

(41.) Donation of a fully completed 2 bedroom flat to a handicapped person in Ikot Ese

(42.) Donation of 2 bedroom flat to a physically challenged {blind} man in Iwo Etor

(44.) Sponsorship of free JAMB preparatory classes in which one of the beneficiaries scored 276 ,which was one of the highest scores in the university aptitude test

(45.) Donation of a church building

After a successful two term as member representing Etinan State Constituency,Rt.Hon.Samuel Ikon was promoted by way of election to represent Etinan/Nsit Ibom/Nsit Ubium Federal Constituency at the National Assembly.

(1.)Vocational Skill Training/Enterprise Development for 50 Youth and 50 Women selected across Etinan/Nsit Ibom /Nsit Ubium Federal Constituency in soap making, fish farming, welding, Barbing, photograph/videography with a cash grant of 50, 000 each to the participant as a starter pack.
Coordinated by the Small and Medium Enterprise Development Agency of Nigeria (SMEDAN) 2016.

(4) Donation of Tricycle (10pcs) to constituents

(14.) Donation of  wheelchairs to the physically challenged.

(16.) Donation of materials for startups in bead making.

(17.) Donation of materials in Hat making and other female accessories.

VOCATIONAL TRAINING FOR 50 WOMEN. SEPTEMBER, 2017 in collaboration with National Directorate for Employment (NDE) AND PROVISION OF THE FOLLOWING FOR STARTUP:

(23.) Donation of materials for startups in bead making.

(24.) Donation of materials in Hart making and other female accessories.

(25.)Donation of materials for production of cake and other confectionaries

Business Development Training for 50 constituents coordinated by the National Directorate of Employment (NDE), 2018

(31.) Donation of 50,000 cash grant to 150 women each carefully selected across the federal constituency to boost trading. 2018

(39.) Provision of 18 units of the solar street lighting system in Mbioto II Community of Etinan LGA.

(45.) Facilitated a Maternity facility for Ikot Isong in Etinan LGA through PHC

(46.) Donation of a church building

(47.)  Financial Grant / Educational support for School fees intervention ranging from N25, 000 to N30, 000 to ease students undergoing regular courses while N50,000 to students in the professional disciplines across tertiary institutions in Akwa Ibom state. (5 students carefully selected across 31wards in the federal constituency to a total of 155 students as beneficiaries.)2016. (Self-sponsored).

(48.) Also cash grant of 20,000 to 100 constituents under special consideration during  empowerment program in 2016 to ease issues of youth restiveness and also help them start small with any endeavor.

Amidst the tense and rigorous lobbying process involved in recruitment and any other form of placement to have constituents gainfully employed, Rt.Hon.Samuel Ikon facilitated placements of quite a good number of constituents across the three local Govt Etinan/Nsit Ibom/Nsit ubium into federal agencies.

(2.) Call for urgent construction of the Nsit Ubium-Eket highway with a collapsed bridge connecting the rich oil Communities by (Mbiekene and Nnung Obong) of Akwa Ibom State to the East-West road.

(3.) Non-release of National Economic Empowerment and Development Strategy (NEEDS) Assessment Intervention Fund and its consequences on the nation’s educational development.

(4.) Urgent Need To Hold An Investigative Hearing On The Issue Of Modern Slavery, Human Trafficking, Domestic Servitude And Forced Labor Confronting Nigeria Citizens Home And Abroad With The Aim Of Bringing The Scourge To A Complete Stop.
Just to mention a few with countless of reports

(1.)A Bill for an act to make Provision for the Management of Mental Health in Nigeria, and for related matters

(2.) A Bill for an Act to Establish The Institute of Healthcare Management of Nigeria and for other Matters Connected Therewith

(3.)A Bill for an Act to Make Provision for the Management of Mental Health in Nigeria and for other Related Matters

(4.)A Bill for an Act to Amend the National Environmental Standards and Regulations Enforcement Agency(NESREA)

(19.) A bill for the establishment of federal university of Agriculture, Etinan, Akwa Ibom state.

Rt.Hon. Samuel Ikon has made Donation of 54 cars to you his constituents within the 12 year period of legislative service to his people .
Posted by Connoisseur at 03:43