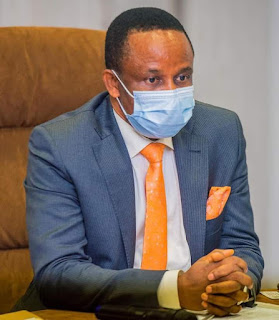 The Governor of Imo State,  Senator Hope Uzodinma, has called on all stakeholders in the Niger Delta to work with the Niger Delta Development Commission in its efforts to develop the region. Senator Uzodinma was speaking when the Interim Administrator of the interventionist agency, Mr. Efiong Akwa, led a team of the Commission’s directors on a courtesy visit to Government House, Owerri.

The governor lamented that over the years, politics had impeded the delivery of NDDC's projects and programmes, and advised Niger Deltans not to allow politics and sentiments to slow down the development of Nigerias oil-rich region. He charged stakeholders to shun politics and embrace good governance. He declared: "The time for politics is over. This is a time for governance."

Senator Uzodinma lauded President Muhammadu Buhari and the Minister of Niger Delta Affairs, Senator Godswill Akpabio, for the appointment of Akwa as NDDC Interim Administrator, to oversee the forensic audit, pending the composition of a new board for the Commission.
The governor expressed support for efforts by the NDDC boss to engage with stakeholders, stating that for NDDC to fast-track development in the Niger Delta stakeholders must be ready to work with the Commission and support its programmes.
He decried how politicians sponsored youths to protest against the activities of the NDDC, urging them to stop and allow peace to reign "because development can only take place in an atmosphere of peace." He added: NDDC is not an ethnic or tribal organization. It was created for the development of the whole Niger Delta region."
Senator Uzodinma called on NDDC to bring more projects.and programmes in Imo State, saying: "We need intervention from you for our roads, our tertiary institutions, health and the NDDC hostels." He called on the Commission to furnish the hostel it built for the state university so that students could use the facility in comfort and safety, noting that it was particularly important now in view of the COVID-19 pandemic.
Earlier, the NDDC Chief Executive Officer told the governor that the Interim Management was meeting with important stakeholders of the Niger Delta region, stating: "This is important, because partnership is key to development."
The NDDC boss stated: "Partnership is a key aspect in United Nations Sustainable Development Goals (SDGs). It advocates for a shared vision, shared responsibility, shared commitment, as well as shared budgeting process and implementation of development initiatives.
"That was the spirit in fashioning a Master Plan for the Niger Delta, the vision of our shared allegiance to this great region. After so many years of neglect, it is important that, together, we do far more for our people. It is important that we do more for a region which has provided the bulk of Nigeria's wealth, and accounted for our rise in the comity of nations."
He commended the Imo State governor for embarking on many projects which were helping to open up areas with rich agricultural potential. "You are helping to boost the economy of these areas," he stated, "and helping to improve the living conditions of the people."
Akwa said that the courtesy visit was both to acknowledge the strategic importance of governors to Niger Delta development, as well as to seek ways in which to forge a stronger alliance with the governments and people.
He remarked: We are determined to continue to make a difference in the Niger Delta region in general, and in Imo State, in particular. We remain committed to providing projects and programmes of enduring quality. To build the Niger Delta is to build ourselves. To make it a better place is to give our people a better place.
The Interim Administrator later handed over keys to four waste disposal trucks to the Imo State Government to assist the government in its efforts to improve the sanitary conditions of the cities in the state.
Posted by Connoisseur at 12:26