Miss Akwa Ibom, Andino Attah reveals why her car was seized + Why she was almost dethroned…“They wanted me to sleep with men for fast money” 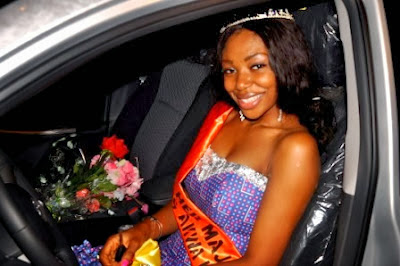 After keeping mute for so long a time, Miss Akwa Ibom, Andino Attah has revealed why she was on the verge of being disgraced out of her throne, divulging further the reason her official car was seized from her.  While putting up an attacking comment on a Facebook post by Daddy-cool Morgan that the court case between Nigeria’s Youngest Editor, Ifreke Nseowo and Captain Iniobong Ekong has been adjourned to January, 2014, the Ibesikpo born beauty queen who was enthroned on September 2012 ended up giving an expose on why she is embattled.  Responding to comments from Promise Etim on why she is attacking Ifreke Nseowo who helped project her career through the media, Miss Attah said she refused to ‘party’ with some old rich men for money as requested by the management. Below are her comments…

“And did you say he protected me from being dethroned?? Hahahahah now that was funny! What did he do??? Please tell me! You don't even know a single thing, you don't know the inside story, from the way you sound, you dnt even know a bit of whatever had happened for you to come here saying Nseowo protected me. Pls kindly tell me how! FYI, the commissioner for culture and tourism retracted the motion after he saw the lies Nsewo printed on the internet and investigations revealed they were set-ups and lies cooked up by the management in a plot to dethrone me due to my refusal to 'party' with some old rich man in port hacourt..(Sadly they needed a prostitute queen, which I wasn't).
“So do not say what you obviously do not know. Thank you my foot! If he was helping me, I dnt believe he would go ahead printing negative stories about me without verifying from me even when he had me as a contact in his phone and even after the truth was revealed, I asked him to kindly take down the story cos whenever my name is googled, even in 100 years to come, that negative story will reflect, he refused. Tell me WHY I shd thank him. Pls get your facts straight before airing your opinions in public, thank you!
“Promise, my name is Andino, not Andiono, as you can clearly see. I didn't have to let the public in on anything and everything @ that time for some reasons. The said man doesn't know me and probably didn't 'want' me as you put it. The people I am refering to were just looking for means of using me in making fast money. And no, that is not our point of target in this arguement.
“I am still asking you yet again to tell me what reason exactly I shd be thanking Nsewo for..?!
If you must know, the trickstars tricked me to Ikot ekpene after I had refused their offer of 'partying' with this old man, claiming I had a courtesy call to discuss my office and projects to a popular government official. Only to waylay me, and forcefully seize my car on the road…” 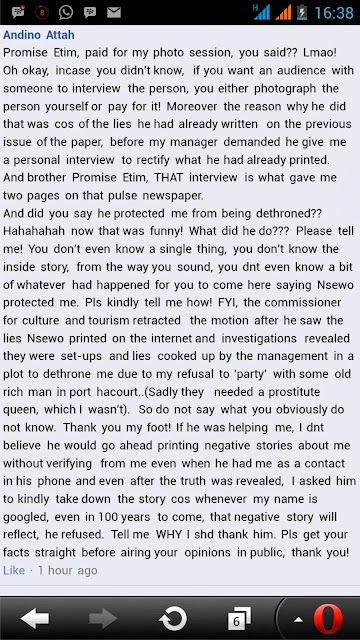 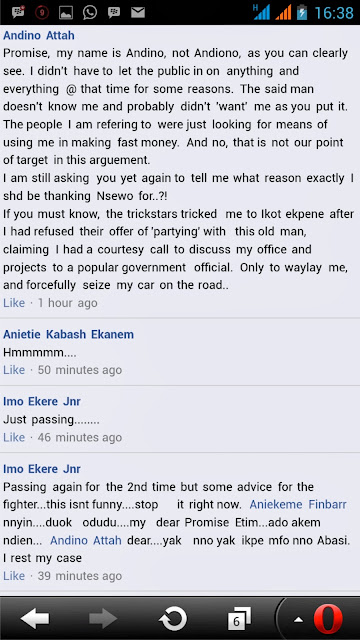 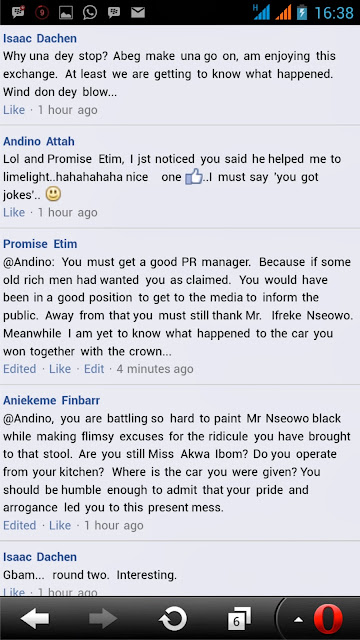 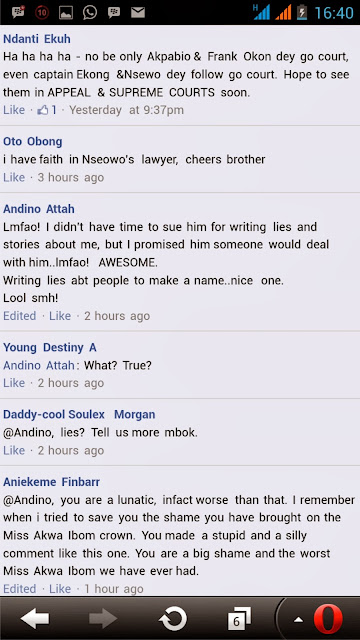 Posted by Connoisseur at 09:49