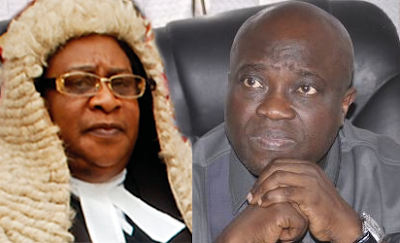 The Court of Appeal sitting in Abuja has voided the judgment that sacked Governor Okezie Ikpeazu of Abia State from office.  Okezie Ikpeazu The court, in a unanimous decision, a five-man panel of Justices of the appellate court, vacated the June 27 verdict of Justice Okon Abang of the Federal High Court in Abuja.
The court held that the controversial Justice Abang erred in law and occasioned a miscarriage of justice against Ikpeazu.


Justice Morenike Ogunwumiju who delivered the lead judgement, held that Justice Abang “committed a grave violence against one of the pillars of Justice” relating to fair hearing.
The court said Justice Abang placed the law on its head when it directed INEC to issue fresh Certificate of Return to Mr. Sampson Ogah.
While upholding the appeal, the court awarded N100, 000 cost against Ogah.
Posted by Connoisseur at 12:25