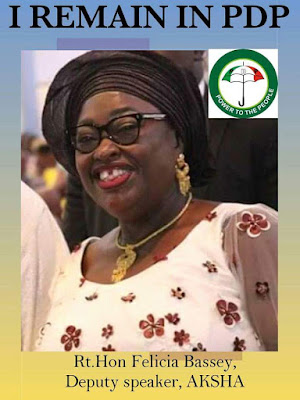 The Deputy speaker of Akwa Ibom State House of Assembly, a staunched supporter of  Peoples Democratic Party (PDP ) in  Akwa Ibom State , Rt. Hon Felicia Bassey, has rubbished reports she has defected to the All Progressives Congress (APC).


In a statement released via phone conversation on Sunday, Felicia Bassey blamed her political foes for what she described as rumors which was sent as text messages to the people of her Constituency also on social media platforms and urged the public to disregard them.

Speaking with Ibom Conscience Newsflash through phone conversation in Uyo today,  Hon. Felicia Bassey said she remains a vibrant and loyal member of the PDP , who shares in its vision and aspiration for a better and stronger Nigeria .

She reaffirmed, 'I remain a staunch member and stakeholder in my party, The Peoples Democratic Party, both at the Local, State And National Level,” The Lawmaker Said.

Felicia said she was not a cheap political product that could be bought by the APC for whatever reason , describing the rumour of her defection as the handiwork of political detractors who fear her chances in 2019.

“I have not defected to APC as has been erroneously reported . I remain a vibrant and loyal member of the PDP . I cannot trade the vision and aspiration of our great party for a visionless APC , ” she said. Hon Felicia Bassey told party members and supporters to disregard the false report.

“There is no iota of truth in it . What has APC got to offer that I will leave PDP . No, it is not possible. I know the rumour of my defection to the APC is the handiwork of those who fear that I will win 2019 Akwa Ibom state House of Assembly, Okobo State Constituency .”

The Akwa Ibom Lawmaker reiterated her support for His Excellency, Gov. Udom Emmanuel in his re-election bid, assuring the Governor Of the support of her Constituency.
Posted by Connoisseur at 02:36