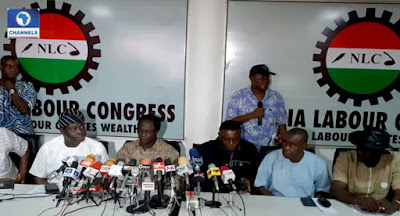 The Nigeria Labour Congress (NLC) has called off its nationwide strike.
This announcement was made on Sunday by the NLC President Ayuba Wabba.


He said the strike is being called off as a result of the firm and formal assurance of the Federal Government to reconvene the tripartite committee on the new minimum wage.

Posted by Connoisseur at 06:53