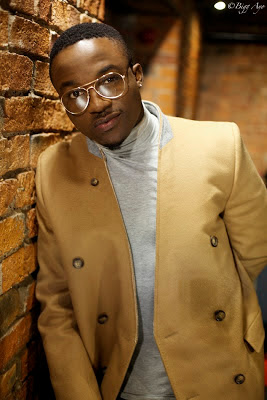 Information going viral in blogs and other social media platforms has it that ‘Kukere’ master, Iyanya has dumped his four months old relationship with Ghanaian actress, Yvonne Nelson. This is coming on the heels of several tweets by the leggy actress which paints the picture that she has been dumped by her man, leaving her heartbroken. The tweets also suggests Iyanya left her for another actress, fuelling the speculation that it is the controversial Tonto Dike that is now tangoing with the Calabar born dude.
But a source close to Iyanya, who spoke to the www.CONNOISSEURng.com said the Iyanya’s relationship with Tonto is only ‘professional’. “In recent weeks, Tonto has been very close to Iyanya. It seems Tonto is trying to cook up a jam (song) with him, but Yvonne became very uncomfortable with their closeness and ended up misinterpreting it”, the source dropped.
Hmmm, it’s too funny to be true that my homeboy has dumped Yvonne for Tonto. Remember when he sang ‘Ur Waist’? All he wanted was Yvonne’s waist and he got it. *lol* I suspect Iyanya wants the waist of all the three girls he mentioned in that song. He got Yvonne’s waist, now Tonto, but I bet you I’m gonna shoot his leg if he goes anywhere close to my sweet heart Tiwa Savage. Iyanya no try me oooo. It seems I go follow comot song, mention fine celebrity chics name so I go follow enjoy the fringe benefits Iyanya is enjoying due to ‘Ur Waist’. I’m very serious ooo.
But I don’t blame the young man if he’s trying to be a badt player. In a recent interview, he said a girl broke his heart, and maybe he’s trying to lay the sins of one girl on many gullible chics who fall easily for his looks and fame.
Here is what he said in the interview “,`I have been heartbroken by a Calabah girl before, it's one of the most painful things ever happened to me. She made me bad actually. She gave me the idea that you don't need to be so nice. She is a Calabar girl and the most painful part is that she married my friend. So I live with that stuff everyday. I still love Calabar girls, I respect them; they are sweet kind and very cool. I am not particular about tribe but that act is still fresh on my memory.''
I feel for Yvonne. She really vented her frustration and showed how heartbroken she is on Twitter. Below are her tweets. 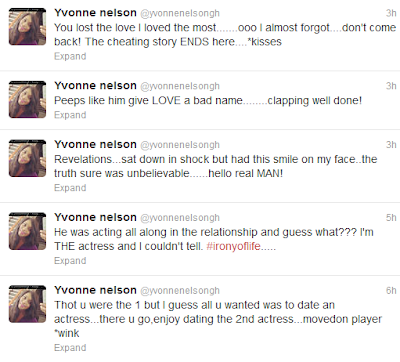 Posted by Connoisseur at 10:16