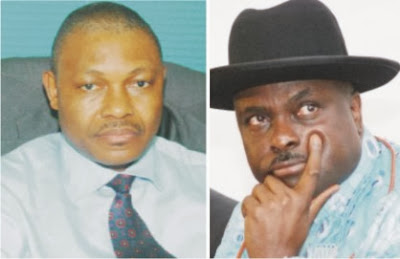 The Managing Editor of Daily Independent Newspapers, Mr. Akpandem James and other top management staff has been ordered to proceed on a compulsory leave by jailed owner of the newspaper, ex-governor James Ibori…Below is the report by PREMIUM TIMES…
Jailed former Delta State governor, James Ibori, has ordered the management of his newspaper, Independent Newspapers Limited, INL, to proceed on compulsory leave with immediate effect. The order from Mr. Ibori, who is currently serving his jail term in a London prison, was handed top editorial and senior management and operations staff of the embattled newspaper by the Chairman of its Board of Directors, Lawan Gambo, during an emergency management meeting on Saturday, December 18.
Mr. Gambo, who presided over the brief meeting, held at the Corporate headquarters of the newspaper in the Ogba area of Lagos reportedly told some top editors and management to go home till January 31, PREMIUM TIMES learnt.


The board chair also indicated that only those of them relevant to the future of the company would be recalled. Those not recalled, he said, would be disengaged and communicated.
Those affected in the purge are Managing Editor, Akpandem James; General Editor, Daily, Ikechukwu Amaechi; General Editor, Online, Oguwike Nwachukwu; General Editor, Features, Emeka Duru, and former Saturday Editor, Olumide Iyanda
Saturday Editor, Charles, Okogene; Daily Editor, Rotimi Durojaiye; and Sunday Editor, Habib Aruna, who were also suspended, were reportedly recalled to continue to produce the paper while replacements are sought for them.
Also affected is the head of Accounts department, Eugene Onyeji, and other  top managers in the Administration, Advertising and Operations Sections.
Under the new order, Ted Iwere, the former Managing Editor/Chief Executive Officer, who left in 2009 in controversial circumstances, was named interim coordinator, and is overseeing the reorganization of the media house.
Mr. Iwere, a close relative of Mr. Ibori, has always been in and out of  the management of the organization right from inception in 2000.
The management of the company was for years mired in serious politics of entrenched interests among top editors, which affected the smooth running of the business.
Matters got to a head recently when 10 management staff petitioned the board accusing Mr. James, the managing editor, of alleged mismanagement and high-handedness.
The opposition to Mr. James was led by former editor, Mr. Ikechukwu, who has had a long running battle with the managing editor over his handling of the affairs of the company.
Insiders said Mr. Ikechukwu rallied other management staff against Mr. James after the managing editor got approval from the board to drop the title editors and appoint them General Editors.
The management of the company then became polarised along those in support of Mr. James and those rooting for Mr. Ikechukwu.
The management crisis soon resulted in the newsroom  being factionalized, sharply along divided loyalty lines among the top editors, a situation that left the board of the company confused.
The board, PREMIUM TIMES learnt, briefed Mr. Ibori on the situation at the company. The former governor responded by asking the board to fire the feuding management staff and editors.
Since Mr. Ibori’s exit from government, and his later travails in the hands of the UK Metropolitan Police over money laundering charges, which resulted in his imprisonment, Daily Independent has been struggling.
Apart from the massive resignation of workers to other media houses, the company is having difficulties meeting its obligations, particularly as they concerned salary payments and other entitlements.
When contacted, Mr. James, the ousted managing editor, and Mr. Iwere, the interim coordinator of the company, said in separate interviews that they were not willing to discuss the situation in the company on the pages of newspapers.

Posted by Connoisseur at 09:50