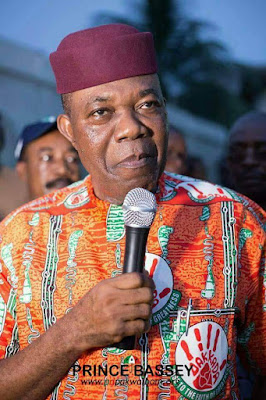 The Secretary to the State Government, Dr Emmanuel Ekuwem has stated that Governor Udom Emmanuel’s performance in Oro Nation in barely three years on the saddle of governance has surpassed the sixteen years tenure of his predecessors, Obong Victor Attah and Senator Godswill Akpabio.


Dr Ekwuwem stated this during his meeting with Oro PDP stalwarts, in appreciation of their support and cooperation since his assumption of office as the SSG.

The SSG noted that the Governor is very committed to the development of the State, adding that Oro Nation in particular and indeed, the State in general have benefited from the Governor’s development strides and policies.

Interacting with the party’s stalwarts, it was hinted that arrangements are in top gear by the people of Oro Nation, the third largest ethnic group in Akwa Ibom State, to formally endorse Governor Udom Emmanuel as their sole candidate in the 2019 Governorship election.

The hint was dropped through a unanimous motion for the endorsement rally by the Oro PDP stalwarts during the meeting held recently in Uyo.

In his remarks, Dr. Ekuwem thanked his kinsmen for their resolve to reciprocate the love the Governor has for Oro people by planning to organise an endorsement rally in support of Governor Emmanuel's second term bid come 2019. He appreciated the Governor for his numerous achievements across the state.

According to him, the achievement include political inclusion of Oro in the mainstream of governance as exemplified in his appointment as Secretary to the State Government, the current repair work on old alignment of the Uyo -Oron road, dualization of the new Oron -Uyo road, the ongoing work on the Etebi -Enwang road, remodeling of Iquita General Hospital, Oron and Amamong Okobo, among others infrastructural strides.

"For understandable reasons, we know how majority of Oro people felt in 2015, but Oro people are very positive. We have since moved forward and therefore this gentleman, His Excellency, Governor Udom Emmanuel is doing a lot to improve the socio-economic lots of where (Oro) we come from. So, we have to encourage and support him", the SSG stated.

Dr Ekuwem said the Governor is committed to the realisation of Ibom Deep Seaport and Industrial City in Ibaka, Mbo Local Government Area, describing him as God fearing leader.

Speaking separately, Oro stakeholders said they were proud of their son and Secretary to the State Government, Dr Ekuwem for convening the meeting to reorder the politics of Oro and show a new direction.
Posted by Connoisseur at 01:29