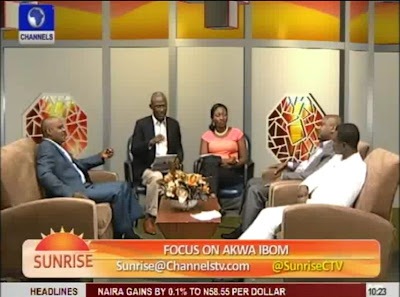 BY IFREKE NSEOWO (NIGERIA’S YOUNGEST EDITOR)
The Commissioner for Information and Communications, Mr. Aniekan Umanah on Saturday, 23rd March, 2013 goofed on the official population of the state. This was during a breakfast TV show ‘Sunrise’ on Channels Television where the focus was on Akwa Ibom State. Speaking against Governor Godswill Akpabio’s prolificacy, Jalingo Agba, a journalist who was one of the analysts on the show tried to compare Lagos State to Akwa ibom State in terms of population and allocation where Lagos State officially has 15 million people while Akwa Ibom 3.9 million but with a budget almost at par with Lagos State, the state’s information boss interjected the Cross River born journalist and said Akwa Ibom has 4.5 million people. Click HERE to watch the video.

Agba however said he was quoting the state’s official website and questioned Mr. Umanah’s preparedness for the interview.
Hear him: “Akwa Ibom State according the last census figures has 3.9m people. I'm giving you information from your state website. Maybe you didn’t prepare before you came for this interview.  Akwa Ibom’s population stands at 3,920,208 with a landmass of 6,900 sq Km. I'm quoting this from your state's official website. Maybe when you go back you can go and correct it.  The state's budget for 2013 is N459.309b and officially with a population of less than four million. Lagos State's budget for the year 2013 is 499b, just about the same figure with Akwa Ibom State and Fashola is dealing with 15million people per capita. “
Umanah responded by saying that Akwa Ibom is a state starting from the scratch, hence there is no basis for comparison with Lagos which is the nation’s former capital which was developed by the Federal Government.
“You cannot compare the infrastructural development in Lagos to that of Akwa Ibom because governor Akpabio started from the scratch. There was no airport when he came in. We had no roads, we had no free education. We had dilapidated infrastructures. We didn’t even have a government house. We had nothing. The place was in total comatose. He is starting from the scratch so there is no basis why Lagos which the Federal Government built should be compared to Akwa Ibom state. Akwa Ibom is being developed totally”, the state information boss said.
Jalingo Agba went on to say during his analysis that superstar singer; Tuface idibia should have rejected the gift of SUV, cash and ask the governor divert the lot to average living Akwa ibom people and also criticized Akpabio for dolling out six million naira to PDP faithful in Port Harcourt recently.
“James Iboro did the same when he was governor by transforming the little Oga. Governor Akpabio is doing same. 98% of the 6,900 square kilometre is still thick forest and rural areas as a matter of fact in Akwa Ibom State. There is a lot of propaganda going on and I know it. How can you give people N6m for snacks? Was it bunch of touts that came to hold the meeting? We are talking about PDP officials, people who are on salary, people who are collecting payment from the party. They came, they were delegates afterall, they didn’t just walk into the hall from the streets. And then Gov. Uduaghan stood up and said 'for us to keep the party, he didn’t say they were hungry. It was Gov. Uduaghan that spoke first. He said 'Mr Chairman, even if you tar all the roads in South-South, if you don’t put food in the table of our members, they will not be happy. He continued by saying that if there is no food in their tummy they will leave to other parties.
“And then Gov. Akpabio came and said you said you are hungry oo, I'm giving you N6m for Mr. Biggs. Was that money captured in the appropriation bill 2013? We talk about the jeeps. 2face does not need 2 jeeps. 2face is rich, he has more than 2 jeeps. He did not need that money for God's sake. 2face sang a song  “e be like say dem wan to tell us another story again ooo”'. He was identifying with the poor people with that song. 2face should have rejected the jeeps after all Achebe rejected awards from the president. 2face should have told the governor to use that money to do other things. 2face has a lot of cars. 2face bought a Lincoln Navigator 6 -7 years ago.
“Akwa Ibom State government has a lot of money and I think they are in want of what they want to do with the money. They are four million people, Akwa Ibom should actually be a paradise with the money it has and not for some one to come and tell them that he gave some people N6m to go and eat snacks. How does it sound like? For Nigerians who are hungry? I think the Hon. Commissioner can continue to say this because he is now in government and they are controlling a lot of money and the governor bought a private jet of 45 million US dollars”, Jalingo quipped.
Commissioner Umanah backed the fact that Governor Ukpabio doled out N6m to State PDP Chairmen and delegates for lunch at Mr.Biggs because these PDP members had waited for the governor for 6 hours without breakfast or lunch.
“ There was an announcement that the party faithful had waited for more than six hours, there was no breakfast, no lunch and so they were hungry. And the governor in his current position and a true party man decided to support party members, consisting of delegates of more than 200-300 from each state and he donated N1m per state which amounts to N6m to over N1200 people. It is not a bad thing. Proponents of this view are people who are perhaps worried about the profile of the governor in helping to re-mould the PDP. The question I will ask you is why was this not going before he was the chairman of the PDP Governors' Forum? Is it that party leaders were not supporting party members, whether clandestinely or openly?”

When quizzed by the show’s hosts on where the money for all these donations comes from, the Abak born politician said Akpabio’s office has budget for hospitality, gifts and grants, stating that the process is very transparent.
“The process in Akwa Ibom is very transparent. In award of contracts, payments or donations the governor of Akwa Ibom does that transparently. He is not subject to investigation because he does it in the open. He supported the daughter of Akwa Ibom State who got married to 2face Idibia, a popular star. And then by implication, he donated the sum of N3m for economy flight on Emirate Airlines which is about N150,000 per person which is how we arrived at the N3m. Annie Macaulay and 2face Idibia created something very significant for Akwa Ibom State.
“They brought in a galaxy of entire entertainment industry and music stars and new ambassadors into the state. If we were to fund destination marketing of branding I do not think that N3m or the cost of one SUV, or even if we were to place advertisement on Channels Television to attract people to the new destination that Gov. Akpabio is building. They came to see the beautiful infrastructure that Akpabio is building, they've seen the Tropicana, they've seen the Ultra-modern e-Library, they've seen the excellent flyovers and all of that. People will keep coming and it will have an effect on the economy of the state”, said Umanah.
Posted by Connoisseur at 09:44