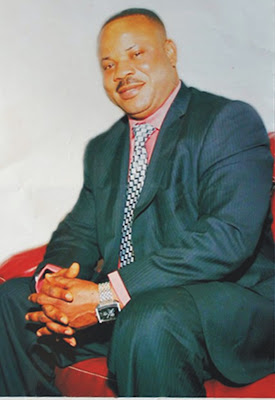 The Chairman of the Akwa Ibom State Tourism Board, Engr (Dr) Michael Enyong a.k.a Baba Ntan has lost his wife.  She died last Sunday. www.CONNOISSEURng.com learnt on good authority that she died of food poisoning. An inside source told me in confidence that she might have been poisoned when she visited Nigeria for the burial of his husband’s dad earlier in the year. The source said since after his marriage, Michael Enyong’s family had stayed abroad and that was their first time of visit after a long while. She has been under medical treatment for food poisoning for about a month, but finally gave up the ghost last Sunday in a foreign hospital.


Michael Enyong who contested for the Uyo Federal Constituency seat in 2011 was recently appointed into the Tourism Board. Mike who is a brother to the owner of the famous Entaco Pharmacy is said to be very devastated and has vowed not to return to Nigeria after the burial of his wife. More details coming soon…!
Posted by Connoisseur at 09:32