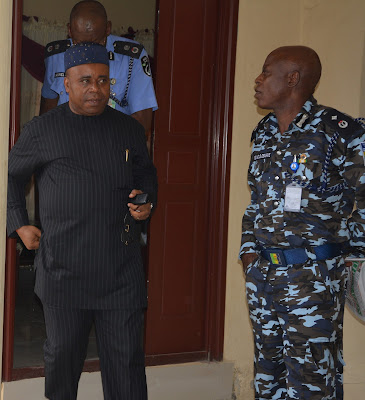 The Akwa Ibom state Governorship candidate of the All Progressives Congress, APC, Obong Umana Okon Umana has told insiders in his camp, the is on a revenge mission to silence what he calls the "Annang Mafia" in the state. A top member of his campaign team who confided in our reporter boasted that, Umana, will become Governor of Akwa Ibom state by all means possible and then, he will go after the Annang people who he said have reigned in the state since former Governor Godswill Akpabio came to power in 2007.

The source who corroborated what, the factional Publicity Secretary of the APC, Mr Ita Awak has been saying stressed that, the Annang billionaires club, will be swept aside as Umana will rope them all before the Economic and Financial crimes Commission, EFCC and confiscate their properties and investments so that, for the next 50 years, no Annang man can stand up to him in terms of money power or become effective politically in the state.
Those who Umana is said to have penciled down have his former boss and friend, now Senate Minority Leader , Chief Godswill Akpabio. Others from Ikot Ekpene Senatorial District are, former Commissioner of Work, Chief Don Etim, Barr. Emmanuel Enoidem, commissioner for Commerce and industry, his Special duties counterpart, Etido Inyang, the member representing Essien Udim State constituency and former chairman of the are, Rt. Hon Nse Ntuen. Others are, the Akpbios including, Sir Emem Akpabio, the State PDP secretary, Ibanga Akpabio, Prince Ukpong Akpabio who was a former special assistant to the former governor and the governors and others unnamed in the great Akpabio family of Ukana Ikot Ntuen.
The dragnet however covers some other chieftains of PDP in Abak 5 zone of the district and what they said arew ibibio collaborators where the names of Senator Bassey Albert, Senator Effiong Bob, Senator Anietie Okon and Prince Uwem Ita Etuk and Chief Paul Ekpo top the list. A political commentator, Surveyor Effiong Iyamba however dismissed Umana's antics as a ruse, and a known plot of the APC to harass and intimidate opponents as is ongoing by the President Buhari led administration whicj will fail.
He said, Umana himself is not clean as he was part of the system as the so-called Engine room and Mr Stabilizer of the system who devised strategies to loot the state. He argued that, there is no bigger thief than Umana who is the richest Ibibio man Alive and who cannot explain the source of his wealth.
Umana only looted akwa Ibom and till date still cannot exhaust monies he stashed away from the defunct Habib and All States Trust bank and others since 2003 and is still doling them out. He said umana's witch hunt will fail as he cannot even win election in his Local Government area where the speaker of the akwa Ibom state House of Assembly, Barr. Onofiok Luke holds away with Senator Bob, Amb. Sam Edem, Otuekong Emmanuel Ibiok among others.
Posted by Connoisseur at 06:04