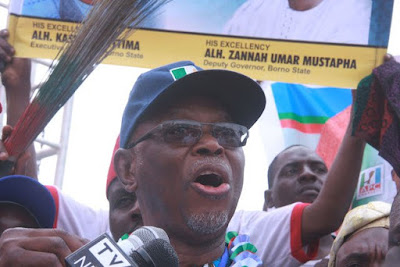 The National Chairman of the All Progressives Congress, APC, has been in the news for the past 24 hours. He is quoted as saying  “I still find the judgment on the Rivers State governorship election totally astonishing. There is something fundamentally wrong in the Judiciary. We have lost very important resource-rich states to the PDP. No matter how crude oil prices have fallen, it is still the most important revenue earner for the country”. Vanguard quoted him as saying that the Supreme Court judges who gave the judgment should be probed. But the party has come out to state that their chairman didn’t make such statement.  A statement by the APC’s national secretary, Mala Buni, said a Thursday report by Vanguard titled, “Oyegun Calls for Probe of Supreme Court Judges” was false. Read below the statement:


“The party wishes to deny this report in the strongest terms.  As much as he expressed ‘total astonishment’ over the ruling of the Supreme Court, the National Chairman of the Party, Chief John Odigie-Oyegun, never called for the investigation of Supreme Court judges. Indeed, a copy of the statement issued following Chief Odigie-Oyegun’s meeting with the APC delegation from Rivers State was widely circulated. At no time during the meeting or in the statement referred to did the National Chairman make such a call for the probe of Supreme Court Judges. What transpired at the meeting was correctly reported in other media outlets. Given that the author of the Vanguard report was not physically at the venue of this event, but relied on this statement, it is baffling that he gave this slant to the story”.
Posted by Connoisseur at 01:03