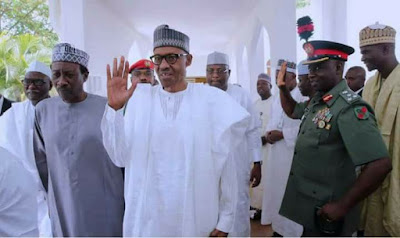 According to Sahara Reporters breaking news which quotes Presidency sources, President Muhammad Buhari, who left Nigeria 45 days ago to resume treatment for an undisclosed medical condition believed to be cancer, has developed speech difficulties. The report stated that, "Previously, Mr. Buhari was also said to be suffering memory lapses. The latest revelation stems from recent attempts to return the President to Nigeria by members of a cabal managing his health and using it to deceive Nigerians.”

Buhari, the report recalled, "left for the UK abruptly on the evening of May 7, shortly after meeting with some Chibok girls who had been released the previous day by Boko Haram. Although Buhari spoke at the event, his voice was barely audible, as he had lost a lot of weight, his condition reportedly complicated by Crohn's Disease.
“When the President was leaving for the airport, he shocked his aides when he asked if they were going to Sokoto, perhaps one of the first signs of his deteriorating memory.
SR noted: "It has now been learnt that President Buhari has not spoken to Acting President Yemi Osinbajo by telephone since his departure. Only last week, the Acting President was asked to await a phone call from Mr. Buhari but when a call eventually came in, nothing coherent was heard from Mr. Buhari, despite what the cabal keeps telling people of his "tremendous" health improvement.”

Posted by Connoisseur at 10:44