"You must work with those who are loyal”, Wike explains why he dissolved state exco 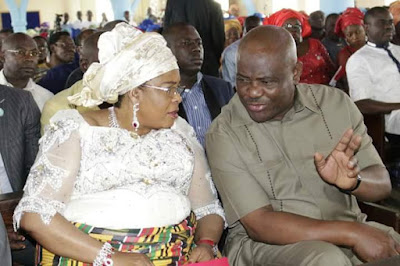 Rivers State Governor, Nyesom Ezenwo Wike has explained that the dissolution of the State Executive Council was done in consultation with the leadership of the Peoples Democratic Party (PDP) in the state.


Speaking during the Election Thanksgiving Service in honour of the Majority Whip of the Rivers State House of Assembly at St Martin's Anglican Church, Ogu on Sunday, Governor Wike said that the dissolution was done to rejig the machinery of government to move the state forward.
He said: "This is when you know those who are loyal and those who are not loyal. There is no crack in government. We are working together. The dissolution was done in consultation with the leadership of PDP in the state.
"You must work with those who are loyal. Those who are not loyal will be shown the way out. Those who are loyal will come back. When you are going into another dispensation, you have to put things in order".
The governor said that the dissolution of the State Executive Council was done at the appropriate time, saying that most states have already dissolved their respective Executive Councils.
"In government, there are those hungry to come in and those hungry to go. If you are a political appointee, you must expect any eventuality ", he said.
The governor said that the administration will continue to deliver on its promises to people.
He particularly lauded the Majority Whip of the Rivers House of Assembly, Mr Evans Bipi for his unwavering loyalty at the beginning of the struggle for the enthronement of a New Rivers State.
The governor said: "When people never gave us hope, Evans Bipi was reliable. Bipi is a very loyal and committed person. Bipi is among the first group of supporters that we had".
He thanked the people of Ogu/Bolo for supporting Evans Bipi all through the rerun elections in the area.
He directed the contractors handling the rehabilitation of schools in Ogu/Bolo Local Government Area to speed up work.
In his remarks, Majority Whip of the Rivers State House of Assembly , Mr Evans Bipi assured Governor Wike of the support of the people of Ogu/Bolo.
The event was graced by Former Members of the Rivers State Executive Council, religious leaders and Caretaker Committee Chairmen.
Posted by Connoisseur at 09:17