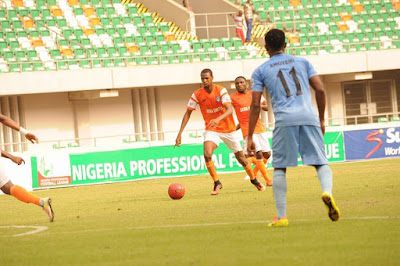 Victor Mbaoma scored a controversial penalty in the 88th minute to helped bottom placed Remo Stars salvage a 2-2 draw against in-form Akwa United at the Gateway International stadium in Sagamu on Wednesday.


Remo Stars started the game in top gear and took the lead inside the opening three minutes when Captain Victor Mbaoma headed in a connecting header from a corner kick.
Akwa United settled in quickly and responded nicely in the 25th minute when Ubong Friday equalised, tapping in Alhassan Ibrahim's cross following a clever exchange of passes between Ifeanyi and Harmony.
The two teams made series of attempts to increase their tally but failed short of hitting the target as the first half ended 1-1
On resumption of play in the second half, both teams continued where the left off in the first half. But it was Remo stars duo of Awoyemi Abiodun and Salefu Ochowechi that rattled Akwa United's woodwork from set pieces.
With ten minutes to the end of the match, striker Musa Newman who was a thorn in the flesh of Remo Stars defenders put pressure on goalkeeper Walbe David whose poor clearance was received by Ifeanyi.
The midfielder's inch perfect pass was brilliantly controlled by Newman who blasted the ball beyond the goalkeeper and into the far post to put the Promise Keepers in front.
But just when Coach Abdu Maikaba boys thought they would be heading back to Uyo with all three points, referee Francis Agbaegbu from Niger State awarded controversial penalty to the home team, much to the surprise of fans at the stadium.
A pass inside the box hit Ifeanyi on the groin but the referee pointed to the spot. Victor Mbaoma stepped up to score and rescue a point for the struggling Sagamu based team.
The draw sees Akwa United maintaining their fourth position on the log with 40 points from 25 matches while Remo Stars still occupied bottom of the table.
The Promise Keepers will next face Enyimba International in Uyo this weekend.
Posted by Connoisseur at 00:59