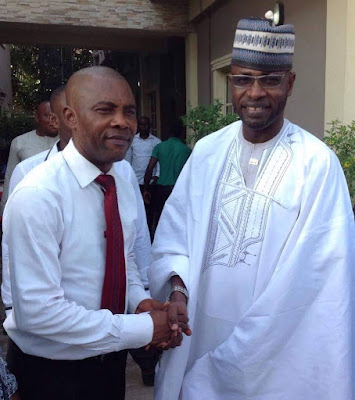 The managing Director of Niger Delta Development Commission (NDDC) Mr. Nsima Ekere has been fingered as the man behind the arrest of the state chairman of Conference of Nigeria political Parties (CNPP) / Chairman of Hope Democratic Party (HDP) Mr. Lincoln Charles.

A source who spoke to our correspondent on condition of anonymity said Mr. Ekere ordered the arrest of Mr. Charles on the perceived non-support stance of the AKS CNPP Chairman who emerged amidst the clandestine wish of his endorsed candidate, Mr. Kelvin Umoh.

According to the source,  four of the state chairmen who are core loyalists of Ekere, Rev. Aniebiet Emmanuel of Peoples Redemption Party (PRP), Kelvin Umoh of (YPP), Joe Itiaba of Accord Party and Stern Etim of People's Progressive Party (PPP, who jointly worked against the emergence of Lincoln Charles as CNPP chairman are the ones used by Ekere to perpetuate the act.

It was also brought to our knowledge that NDDC recently awarded  school rehabilitation contracts to the four state chairmen, on condition of using the money to mobilise and fight against the administration of Governor Udom Emmanuel by frustrating the governor's effort to ensure the state is safe for residents and interested investors.

Our source added that Ekere whose desperation to become governor even when he has forseen  his failure has vowed to employ all political arsenals and connections to constantly intimidate and harass noble citizens across party lines collaborating with His Excellency Deac Udom Emmanuel to develop the state.

An eye witness informer confirmed that a top police officer stationed at Ikot Akpan -Abia who is Nsima Ekere's ally, who arrested the heavily pregnant wife of the SA to Governor Emmanuel recently, was  the one leading the team that arrested Mr. Charles and has been the one intimidating, threatening and harrassing present CNPP led state executives and other IPAC executives.

It could be recalled that iReporters reported the clandestine arrest of Mr. Lincoln Charles by policemen under the watch of the four state chairmen currently on the payroll of NDDC MD.


Lincoln Charles who is said to have been battered before taken away to an unknown destination by men of the nigeria police from the state headquarters, Ikot Akpan-Abia is yet to be heard from.

The state police public relations officer (PPRO), DSP MCdon, said he does not have such information, hence he cannot comment.

As at the time of filling this report, details of Mr. Lincoln's arrest and his whereabout remains sketchy as efforts to reach him proves abortive.
Posted by Connoisseur at 05:59