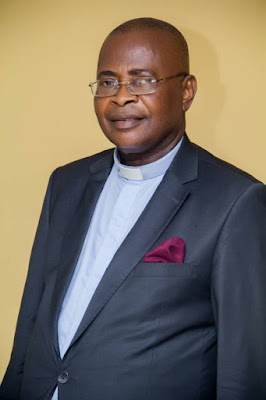 In his goodwill message at the just concluded Itu/Ibiono Ibom Federal Constituency Solemn Assembly/ thanksgiving service on Sunday,April 29, 2018 organised by Christian Association of Nigeria tagged THE TRIUMPHANT GOD,the CAN chairman expressed his gratitude to God for the successes recorded in Akwa Ibom through his servant Deacon Udom Emmanuel, the Executive Governor of Akwa Ibom State Rev.Ekwere who is an academic doctor,showers an encomium on the the current CAN exco for planning  the event which is the second in the row after that of Eket Federal Constituency,emphasising that his cabinet stands for truth at all times and will stand in the place of prayer to uphold the hands of the governor in furtherance of the myriads of achievement recorded within three years.


Assessing the developmental strides of the governor,Deacon Udom Emmanuel,CAN Chairman decribes him as 'a gift from God,illustrous son,erudite, dynamic of dispensational leader sent for a time such as this'.

Defining  his stance on the the second term bid of the givernor,Dr Ekwere established that AKwa Ibom State was structured on truth,equity and justice .which has been the norm so far.He canvasses support for the governor to fulfil the Devine Mandate in the second term which is a practical display of justice granted the socio-econmonic uplift in the state,making Akwa Ibom state a sinossure of infrastructural reneissance in Nigeria and the global scene.'what is good for the goos,is also good for the gander',he observed.

However,The CAN boss drew  an attention to the discordant tunes making the rounds as a result of miguided utterances in the media;after a media parley a fortnight ago.In his words:' The Present CAN executive in Akwa Ibom  State stands for truth and will do so at all times.Although some people have misinterpreted our stance on salient issues,CAN  will not join issues with anyone or group because we are too mature to be distracted'

Responding to the incessant killings of Christians by herdsmen in the state and the protest which took place same day,Dr Ndueso Ekwere expressed his disstifaction about the way the situation is being handled by the Federal Government.According to him,athough Akwa Ibom State has not experienced such because of the Mighty Hand of God,CAN totally condemn the continuous and ungodly custody of little Miss Leah Sharibu,a Dapchi school girl just because she cannot deny her faith and Master,JESUS CHRIST.

The clergyman put it thus:'We condemn in strong terms,the killing of innocent souls including the catholic priests during gheir mass in Benue State.The remaining Chibok girls yet to be released should be freed without further delay.We are resolute in our our decision to ceaslessly pray for unmerited favour,protection of lives and property.We strongly urge Nigerians to imbibe and show the Spirit of love and kindness and tolerance to one another as exemplified by our Lord Jesus Christ and his teachings.Let us rise in our mandate to support the devine mandate of our Governor to make Akwa Ibom greater',he avered.
Posted by Connoisseur at 05:24