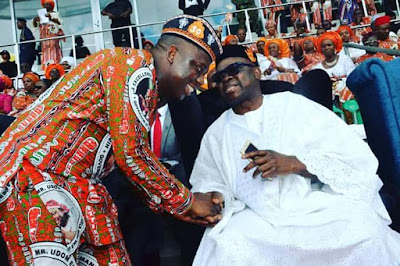 Governor Ayodele Fayose has said he will appoint top MC, Raphael Edem as his Minister of Information if he becomes President of the Federal Republic of Nigeria in 2019.

Fayose who is vying for the presidential seat under the platform of the PDP stated this at the Akwa Ibom Christian Assembly's summit, tagged "Dominion Mandate Conference" at Ibom Hall Grounds, Uyo on Thursday.
Wowed by the panache and microphone artistry exuded by Ralph, especially the manner the MC introduces him to the stage each time he attends a public function in the state, Fayose said he will "steal" Raphael from Udom to work with him in Aso Rock, Abuja.
Raphael Edem has served as master of ceremonies at state functions for about a decade. He was appointed Special Assistant to Governor on Public Affairs in 2015.
It could be recalled that in year 2000 former Director of Protocol, Aniekpeno Mkpanang was snapped up by former President Olusegun Obasanjo who was impressed by Mkpanang's microphone prowess during a state visit to the state.

Posted by Connoisseur at 09:47