Akwa Ibom state Governor, Udom Emmanuel has stated that the state government will not tolerate any act of cultism at the 2nd Akwa Ibom Youth Sports Festival which begins in Uyo, on Tuesday.
The governor dropped the hint on Thursday in Uyo while conducting the draws for the participating teams at the 5-day sports fiesta for primary school pupils and secondary school students representing the 31 local government areas in the state.
Represented by the deputy Governor, Moses Ekpo, the state chief executive urged the competitors to take advantage of the exposure and the atmosphere of the sports meet to prepare themselves to take over as future world acclaimed champions in their respective field of sports. 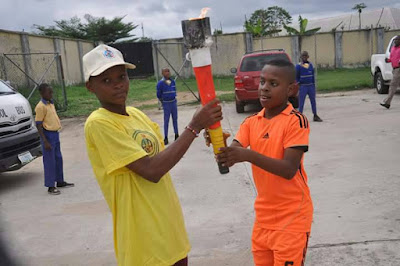 He also remarked that the first edition of the competition held in March, 2017 was rewarding to the state as it made for the emergence of stars who made the state proud at the National Youth Games subsequently held in Minna, Niger state. He also added that some of those young talents discovered have gone further to distinguish themselves elsewhere outside the state and therefore expressed the hope that this year's edition will yield greater sporting dividends to the state.

Commending Commissioner for Youth and Sports, Monday Ebong Uko and other officials in charge of organisation and logistics for their sacrifice, the Governor warned games masters and school heads to desist from bringing in non-students to compete in any event as the practice amounts to dishonesty and a negation of the philosophy and purpose of the tournament.
He announced a prize money of ten million naira to the local government area whose competitors win the highest haul of medals at the games, five million naira to runners-up and three million to the third place team.

The games which begins on Tuesday at the prestigious Godswill Akpabio International stadium with fanfare will be declared open by the state Governor. It will feature over 200 competitors slugging it out in 25 events including football, karate, baseball and others.
In the opening match of the male football event, Uruan local government area will play Etinan while in the female category, Obot Akara will trade tackles with Itu. The games will end on Saturday, March 10, 2018. 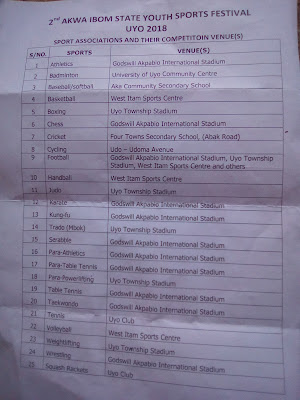