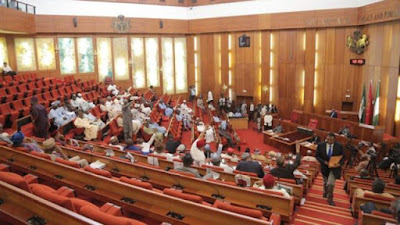 Any person found guilty of any form of hate speech that results in the death of another person shall die by hanging upon conviction, reads a new bill by the Senate.The bill, which reflects the growing concern over the spate of violence in the nation, was sponsored by the spokesman of the upper chamber, Senator Aliyu Sabi Abdullahi (APC, Niger).

It also seeks the establishment of an ‘Independent National Commission for Hate Speeches’, which shall enforce hate speech laws across the country, ensure the elimination of the menace and advise the Federal Government.For offences such as harassment on the grounds of ethnicity or racial contempt, a culprit shall be sentenced to “not less than a five-year jail term or a fine of not less than N10 million or both.”

The bill notes: “A person who uses, publishes, presents, produces, plays, provides, distributes and/or directs the performance of any material, written and/or visual, which is threatening, abusive or insulting or involves the use of threatening, abusive or insulting words or behaviour, commits an offence, if such person intends thereby to stir up ethnic hatred, or having regard to all the circumstances, ethnic hatred is likely to be stirred up against any person or person from such an ethnic group in Nigeria.”

It notes that “a person subjects another to harassment on the basis of ethnicity for the purposes of this section where, on ethnic grounds, he unjustifiably engages in a conduct which has the purpose or effect of (a) violating that other person’s dignity or (b) creating an intimidating, hostile, degrading, humiliating or offensive environment for the person subjected to the harassment.

“Conduct shall be regarded as having the effect specified in subsection (1) (a) or (b) of this section if, having regard to all the circumstances, including in particular the perception of that other person, it should reasonably be considered as having that effect.”The National Commission for Hate Speeches shall be headed by an executive chairperson who would be appointed by the president on recommendation of the National Council of State, subject to the confirmation of at least two-third majority of the National Assembly.

The commission shall discourage persons, institutions, political parties and associations from advocating or promoting discrimination or discriminatory practices through the use of hate speeches; promote tolerance, understanding and acceptance of diversity in all aspects of national life and encourage full participation by all ethnic communities in the social, economic, cultural and political life of other communities.It shall also plan, supervise, coordinate and promote educational and training programmes to create public awareness, support and advancement of peace and harmony among ethnic communities and racial groups.

It shall furthermore promote respect for religiouss, cultural, linguistic and other forms of diversity in a plural society; promote equal access by persons of all ethnic communities and racial groups to public or other services and facilities provided by the government.

The Senate also disclosed that its bid to pass the 2018 budget was being frustrated by ministers and heads of parastatals who have refused to provide details on allocations to their ministries.Without mentioning names, the upper chamber issued a fresh seven working-day ultimatum to the affected ministries.

Similar ultimatums in the past had done little to facilitate the budget preparation.The Vice Chairman of the Senate Committee on Appropriation, Sunny Ogbuoji, said: ” The majority of the Ministries, Departments and Agencies are not coming forward to interface with the standing committees. Some of the ministers will tell you they are going outside the country, and because of that, the MDAs are not fully ready.”

The Senate President, Bukola Saraki, stressed that the upper chamber wants the process concluded as early as possible, regretting: “The perception is that it is the parliament that delays these things.”He said: “The Senate Majority Leader will communicate and get in touch with the executive arm of government, so that these MDAs can be told to play their part to ensure that this exercise can be completed.

“I appeal to all these ministers and managing directors that keep on travelling that this is a time for them to be on ground and ensure that they finish this report.”The Deputy Senate President, Ike Ekweremadu, said it was unfair for the heads of parastatals to “hold the country down.” He noted: “It has come to a stage where we have to consider taking what has already been presented by the president from those MDAs as the position of the MDAs, instead of waiting for them for ever.

“We gave them an opportunity about three weeks ago to make this a priority but it seems that has not happened. So, instead of the country suffering, it is better to give them just few more days. And after that, the relevant committees will adopt what was sent to us by the president as the positions of the MDAs. We cannot continue to be running the country like this.”

The Senate furthermore faulted the assumption of office by the newly nominated acting Executive Secretary of the National Human Rights Commission (NHRC), Anthony Okechukwu Ojukwu, ahead of a confirmation.It also mandated its committee on judiciary to investigate the Attorney General of the Federation and Minister of Justice, Abubakar Malami, for directing Ojukwu to do so.

The upper chamber reached the resolutions following a motion by Senator Dino Melaye who noted: “If the attorney general, who is supposed to be the custodian of our laws, will flagrantly ask an individual who has been nominated by Mr. President but has not been confirmed by the Senate to go and assume duty, and the person has since resumed, then we are not practising democracy. We have no regard for the rule of law.”
Posted by Connoisseur at 01:10