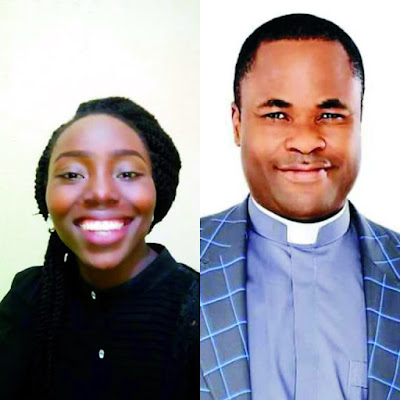 …why the lady resigned her teaching job
BY KENNETH JUDE
All is now set for the much anticipated wedding of former Father Patrick Henry Edet with his heartthrob, Inyene.
The wedding which is fixed for Saturday March 17, 2018 will hold at Ibom Hall, IBB Avenue, Uyo by 11am.


Investigation by THE INK revealed that the lady’s full name is Inyene Sampson Akpan who hails from Atai Ibiaku Itam in Itu Local Government Area of Akwa Ibom State.
Inyene, who is said to be dark in complexion, will be officially presented today during Grace Family fellowship to the congregation as was promised by Patrick Edet last week.
The lady, according to a source, was a teacher at Hillside International Nursery School, Uyo until her resignation few months ago. She was a French teacher and a onetime Students’ Union Government (SUG) presidential aspirant in Uniuyo, it was learnt.
A staff in Hillside School told our reporter that Inyene had resigned from her teaching job few months ago citing personal reasons. But it was learnt that her resignation was unconnected to her marriage plans with Edet.
Her resignation, it was gathered, must have been informed by the need for her to have more time to concentrate on Grace Family programmes and the wedding plans.
Contrary to rumours that they had dated for four years, THE INK can authoritatively report that Patrick Edet only got to know the lady when she invited him to minister at her programme in May last year. The programme was tagged “Understanding your Calling as a Music Minister.” It was held at Victory Chapel, University of Uyo Town Campus on May 7, 2017.
Prior to the programme, then Fr. Edet had featured the lady on his Grace and Inspiration radio show on Planet FM on May 3rd last year where she gave insights about the event. Further investigation revealed that this is where Patrick Edet struck a chord of understanding with Inyene.
Few weeks after the lady’s programme, he invited her to be the keynote speaker at his inaugural programme, ‘Youth Summit’ held in the later part of May same year. The lady obliged. Patrick Edet was still a Catholic priest at the time.
A source close to Patrick hinted our reporter that after the Youth Summit last year, the ex-priest was fascinated by the keynote speaker’s dexterity, spiritual awareness and intelligence hence started inviting her regularly to his programmes. According to him, the foundation of the relationship began from there and grew deeper, gradually, and has now culminated to marriage.
It was also gathered that while the wedding will be open to all in church, the reception will be strictly on invitation. This, according to an insider, is to control the crowd and ward off any breakdown of law and order owing to the sensitivity of the wedding.
The reception will be merged with a musical album release, it was gathered.
Since leaving the Catholic Church about six months ago, Edet has been holding his programmes at Ibom Hall, and has recently begun Sunday services.
It could be recalled that Patrick Edet had announced his resignation from priesthood on August 2nd last year during his radio programme, Grace and Inspiration on Planet FM.
...Culled from The Ink Portal Newspaper
Posted by Connoisseur at 01:44