EKET SENATORIAL DISTRICT RACE 2019: WHY VICTOR ANTAI IS FAR AHEAD AND ABOVE OTHERS 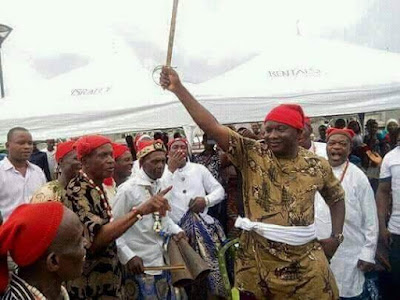 The forthcoming elections promise to be an interesting one, mostly, for members and followers of the People's Democratic Party (PDP). Never had there been a time that the party has been in a fix, in relation of whom to fly its senatorial ticket than now. Ab initio, before the conduct of its primaries, book makers and political pundits, have always told us the aspirant that would ultimately or likely become the party's candidate. These predictions were almost  99.9% correct. Interestingly, same cannot be said of the forthcoming elections. The reasons for this being the caliber of personalities that have indicated interests to represent the zone in the upcoming elections. I must confess, so far, those that have indicated interest in the race are some of Oro's finest that can be found around. These personalities range from Hon. Barr
Ekpenyong Ntekim, also known by the acronym B.E.N. by his admirers and political associates. Mrs Akon Eyakinyi, a one time minister of the federal republic of Nigeria, and currently the Chairman Board of Governing Council, Akwa Ibom state polytechnic, Ikot Osurua. RT. HON. Victor Antai, a two time chairman of his rich Mbo local government area, a one time commissioner of local government and chieftaincy affairs and currently the commissioner of culture and tourism, Akwa Ibom state and those still undecided when it comes to the question whether or not they will stand for the election.

THIS POST STRICTLY FOCUSES ON THE SUBJECT MATTER, RT. HON. VICTOR ANTAI, AND IT'S ESSENCE IS TO BRING TO THE FORE WHY HE'S THE BEST PERSON FOR THE JOB COME 2019. IT DOES NOT CONCERN ITSELF WITH HIS MANIFESTO, SINCE I DON'T HAVE THE MANDATE TO SPEAK ON THAT.

After several attempts to represent his people at the national Assembly and in other tiers of government, RT. HON. Victor Antai was finally nominated for the PDP's chairmanship ticket for Mbo local government area in 2008. He won the general elections and was equally returned for a second term given his sterling performance in his first outing. RT HON. Victor Antai was into private business before his foray into public service. He is a chief, a devoted christian and he's happily married and christian.

HIS PUBLIC LIFE AND ACHIEVEMENTS

As Shakespeare rightly pointed out, "some were born great, some achieve greatness and some have greatness entrusted in them". Victor Antai belongs to the last group. While others are struggling to achieve a milestone in the political landscape of their times, Victor Antai has already engraved his name in gold in the sand of times. As Chinua Achebe would say, " his chi has been good to him" as such, he does and gets things done effortlessly.

As the chairman of Mbo LGA, he gave the area its first stadium. For the very first time in the annals of the local government, it had a place where all and sundry could congregate together whenever the need arises. During his administration, the local government achieved complete peace and tranquility, this was because he prioritized peace and knew that without it, it would be difficult recording any meaningful developments. Not to talk of the many students that benefited from bursary payments and project aids from him. Many sons and daughters of his Mbo local government and by extension Oro nation that are graduates today, will always remain indebted to RT. HON. Victor Antai for the assistance he rendered to them at one point or the other of their academic pursuit. It is also on record that he has facilitated the employments of many sons and daughters of Oro into the state civil service. As the commissioner of local government and chieftaincy affairs, Akwa Ibom state, he made peace his central focus. He ensured that all inter-communal and chietaincy related crises were amicably resolved, therefore, contributing to the over all peaceful disposition of the state at large. He proved his managerial competence when he was moved from the ministry of local government affairs to that of culture and tourism,in a major cabinet reshuffling by the governor. As a fine administrator, he turned the once hitherto dead and relatively unknown ministry of culture and tourism into the darling of all.

WHY HE'S THE BEST FOR THE JOB.

Though it would amount to apolitical to start talking about aspirations of his opponents in the forthcoming elections, the truth is, RT. HON. Victor Antai towers far and  above all of them in all ramifications. He has proven himself worthy of being the zone's representative in the senate of the National Assembly.
I laughed to stupor when I read what a friend wrote and posted about him some two weeks ago. My good friend and brother Mr. Iniabasi Bassey Asuquo wrote " The senate not where they play or dance masquerade, though Victor Antai is good, it would amount to sending a division 3 club to play in a competition where you have the best. According to him, his opponents are better than Victor Antai when it comes to effective representation.

My take: It is a fact that Victor Antai is the commissioner of culture and tourism of Akwa Ibom, the primary function of the ministry is to retain and maintain our cultural values / heritages. Therefore, if the commissioner does what was alleged by Iniabasi Bassey Asuquo, then it means the commissioner is only carrying out the duties of his office. If he gets to the senate, he will sure execute the duties demanded of a senator.

One peculiar thing among all these political gladiators angling to represent us at the senate is that, they have all been tried and tested in public life and most of them failed woefully. Apart from RT. HON. Victor Antai, who among them can show us what Oro has benefited from them in their outings as public officers?  enough of this recycling of old politicians that can't add value to our lives, we need those that are vibrant and can compete favorably in a senate with the best brains. The world is now looking up to the youths to bring about the much needed effective change, Eket senatorial district cannot be an exception. RT. HON. Victor Antai is the best man for the job.

He has never disappointed his people in his public outings, I don't see him failing us if he's been given the mandate to represent us.

A VOTE FOR RT. HON. VICTOR ANTAI, IS A VOTE FOR THE DEVELOPMENT OF OUR COMMUNITY.