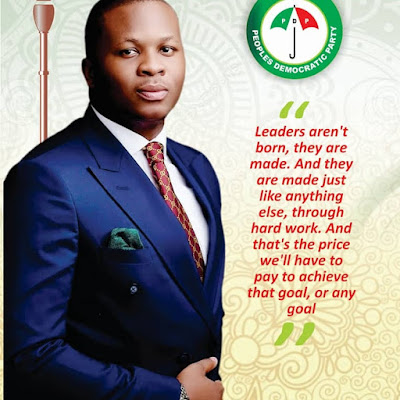 It is often said that you can stop a moving train, but very impossible to stop a man whose time for manifestation has come. I have watched the rise of Barr. Otobong Bob in the political circle, and the events that have so far unfolded, and come to the conclusion that he has been anointed for victory.


The event of late have reminded me of what happened between Haman and the Jews. When Haman had thought that he had concluded plans to frustrate Mordecai and the Jews, he didn't know that he was yet to begin. His wife Zeresh in Esther 6:13 bluntly told him, "If Mordecai be the seed of the Jews, before whom thou has begun to fall, thou shall not prevail against him, but shalt surely fall before him".

I have watched with excitement as political Hamans who thought they had finished Barr. Otobong Bob fall down flat.

The recent technical knockout came from the endorsement of Barr. Bob by Ubium South elders, Elders of Nsit Clan, Ubium Elders Caucus, among others, as their candidate for  Ubium State Constituency come 2019.

Like a movie that is still unfolding, the interest and curiosity is electrifying. More groups, organizations, stakeholders, elders, youths, prominent sons and daughters of Nsit Ubium have unanimously drummed support for Barr. Otobong Bob's candidacy.

Like Apostle Paul once asked, What then shall we do? Wisdom demands that he who wants to succeed should tow the path of success. I am not attempting to dissuade other contenders to throw in the towel, they can go ahead if they want. But if they need my candid opinion, it is high time they towed the line of victory, by joining Barr. Otobong Bob's camp. He has been anointed for victory, come 2019, to represent Nsit Ubium people in the Akwa Ibom State House of Assembly.

He has the capacity for effective representation, as he had been baptised in the pool of lawmaking from childhood. He is the best hand for the job. Join other significant individuals to support him. Remember, what an elder sees while sitting, a child may not see even if he is on top of a tree.
Posted by Connoisseur at 04:57