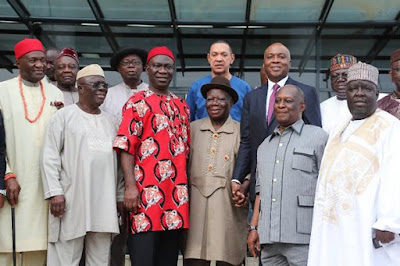 Prominent leaders of the southern and Middle Belt parts of Nigeria earlier today met with the Senate hierarchy.

Receiving them were President of the Senate, Bukola Saraki; Deputy Senate President, Ike Ekweremadu, and several other senators.

A member of the delegation said the meeting would discuss security and elections sequence reshuffle, among others.
Posted by Connoisseur at 11:42