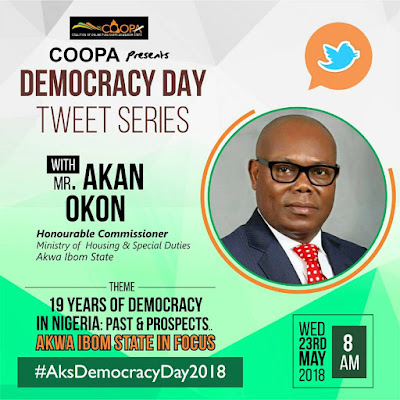 One man who has played a vital role in the cabinet of Governor Udom Emmanuel has been trapped for questioning by members of the Coalition of Online Publishers in Akwa Ibom State (COOPA).

An Itu born politician and financial expert with experience in the banking sector spanning more than two decades.

Tagged ‘DEMOCRACY DAY Tweet Series’, the interview is to highlight development and spotlight personalities, captains of Industries, Politicians, State and Nation Builders as they discuss achievements in their fields and suggestions to further better the lives of Nigerians. The initiative will feature series of interview sessions with stakeholders in various industries, discussing topics centered around the theme; ‘19 Years of Democracy in Nigeria : Past & Prospects...Akwa Ibom State in focus’.

Mr Okon was off to a great start after his national service year, by joining the Central Bank of Nigeria (CBN) where he held several positions in Nigeria's apex bank before his departure. Some of the banks Okon left a stunning imprint include; FinBank and Standard Trust Bank Limited now United Bank for Africa (UBA). At First Inland Bank Plc, where he served as Head Investment Banking, area executive, South South. His job responsibility here was to supervise all the branches of the bank in Akwa Ibom, Cross River, Rivers and Delta States.


He was the Managing Director of Fantixis Investments Limited, a financial advisory firm prior to his appointment as the Commissioner for Finance, now currently serving as Commissioner for Housing & Special Duties.

Despite his tight schedule, Mr Akan Okon will open his doors to new media practitioners on Wednesday, 23rd May 2018 by 10am to review Nigerian democracy from the banking and finance perspective, reaching out to millions of Nigerians via social media channels (Twitter, Facebook and Instagram), he is speaking after Barr. Ekong Sampson, Special Advice to the Governor on Political/Legislative Affairs who kicked off on a high note.

The general public can participate by making posts using the hashtags #DemocracyAt19 and #AksDemocracyDay2018 for questions and contributions.
Posted by Connoisseur at 08:33