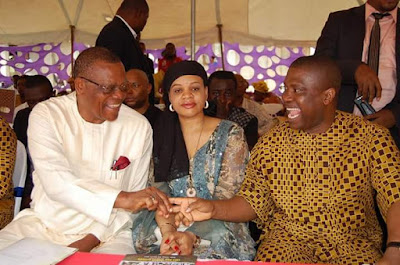 Materials for the ward congress of the All Progressives Congress for Akwa Ibom State which arrived the State on Friday have been hijacked and diverted to a hotel in Osongama, a housing estate within the State capital.


This is happening as caucus members of the party were meeting on Friday evening to discuss modalities for the ward congress which will be holding today by 10:am.

Prior to this moment, there has been disagreement on the modalities to use for the exercise.

Obong Nsima Ekere, a chieftain of the party and former deputy governor of the State had insisted that the current executives of the party should be retained.

One report has it that Ekere paid about N100million to the national leadership of the party to get their support for this scheme.

Earlier, members of the party kicked against a "strange" proposal to upturn the procedures for the congress put forward by Atuekong Don Etiebet.

Etiebet who is the State caucus chairman of the party had proposed what is called "guided congress".

Within the last few days members of the APC in Akwa Ibom State have been in disarray over plot by Obong Nsima Ekere and a few others to hijack the congresses.
Posted by Connoisseur at 17:10