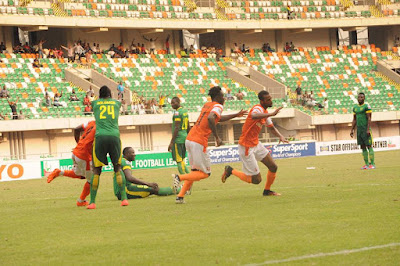 Football followers in the country will be monitoring with keen interest proceedings from Jos when league leaders Plateau United will engage 3rd placed Akwa United in a top of the table clash.

This blockbuster fixture will see two exciting teams who are separated by five points on the log go head-to-head for the three points at stake to further boosts their chances of becoming champions at the end of the season.
Plateau United are unbeaten at home in 13 matches and they have stayed on top of the log longer than any other team since the beginning of the season.
Akwa United will be highly motivated going into the game, following their impressive results of 7wins, 2 draws with one defeat in their last ten games.
Coach Abdu Maikaba has said that his team will not be frightened by their host's home record but insists that the match will offer the football community the opportunity to watch good football.
"This will be a football match between two best teams in the league who are on a mission to win the league. Plateau United are on top of the log and they will be hoping to remain there, but unfortunately for them we are also aiming for the top spot".
" This match will be very interesting because at this stage of the season every point is very crucial. They may be unbeaten at home but that will not scare us because we are determined to fight for every available point irrespective of the match venue. We were the first team to beat Plateau United this season so we can do it again".
Coach Maikaba will be expecting his boys to continue with their superlative performances as they hope to close the gap on the leaders to within two points while also targeting their second away win of the season.
The two free scoring sides have scored 70 goals this season and the game is set to light up Matchday 28 fixtures.
Posted by Connoisseur at 03:36