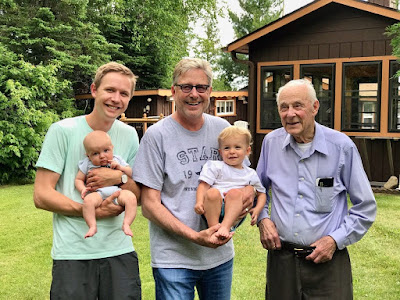 American singer-songwriter, pastor evangelist, Don Moen who was reported dead by a news website is alive and has tweeted a picture of his father, himself, son and grandson- the four generations of his family.

“Celebrating 4 generations in Minnesota today! Here’s a photo of my Dad, son John holding Bennett and me holding Luke. Love my family!!!,” the singer, songwriter, and producer of Christian worship music said in the tweet @donmoen.
It was however not clear if Moen tweeted the picture in reaction to the report by a website that he had died on ‘early morning’ after he was rushed to General Acute Care (GAC) Hospital in California as a result of stomach problems.
In the obvious fake news, the website had quoted President Donald Trump and Bishop T.D. Jakes as paying tribute to the gospel artiste and worship leader.
Posted by Connoisseur at 04:17