iROKING is the sister company to iROKOtv which is both owned by Jason Njoku. Just like iROKOtv is known for Nollywood movies, iROKING was built in line for music. They wanted another great platform for music just like they have with iROKOtv and made Michael Ugwu the CEO of iROKING. Something went wrong between him and Jason earlier this month and he was fired. Nothing was heard from both sides until today, when Jason Njoku's team made a press release. Michael who felt not all what they said was true, decided to say his own part and informed the public he will be starting something else pretty soon. Sadly, Michael is one of Nigeria’s leading young tech executives and Jason Njoku is also one of the best in what he does. Hope they resolve this soon. Find their statements after the cut…

From Jason Njoku's Team
We can confirm that Michael Ugwu is no longer the CEO of iROKING and has left the company. He was dismissed earlier this month with immediate effect for gross misconduct. It came to light that, whilst under contract and salary of iROKING, Michael Ugwu set up and launched his own digital music platform, in direct competition with iROKING. This is an unequivocal breach of the robust non-compete and confidentiality clause he signed when he joined the iROKO team. We will not be divulging any further details on the subject matter for legal reasons.

A number of the iROKING staff have also been dismissed on the grounds of gross misconduct. This action, alongside the dismissal of Michael Ugwu, was taken by the iROKO Management team in order to protect the intellectual property and reputation of our online music platform, as well as our artists’ work.

As part of an organisation-wide restructure, we have decided to streamline the iROKING team based in Lagos, and have now redistributed a number of the core tasks across our global teams in London and New York. These changes have been made in order to make the strategic and day-to-day running of iROKING more effective and productive.

Those who left the company have been given a generous six weeks’ severance pay, which is 50% more than stated in their employee contracts.

iROKING, as one of Nigeria’s leading digital music platforms, continues to showcase some of the country’s most prolific and exciting artists. Since launch, we have recorded over 350 Million YouTube hits for our artists and we have over 1.1 Million users downloading tracks from our online and mobi platforms every month. We remain committed to our artists and our users and continue on our mission to support and develop digital distribution for Nigerian artists. We expect to announce a new CEO for iROKING in the coming months.

I would like to state for the record that a decision to wind down iROKING was taken before the iROKO management “apparently’” fired me. I was verbally asked to become COO of Spark Ltd which I summarily refused stating my intention to stay in the music space. It has been clear for some time that iROKO Partners wanted to exit the music space culminating in the winding down of iROKING so I am still fully trying to understand how I would set up a platform to compete with a platform that was to be “scrapped” according to Mr Jason Njoku.

For the record I would like to see physical evidence of the digital platform I have set up. A copy of the apparent companies registration will suffice. I also strongly suggest to the management of iROKO Partners that rather than sending out press releases and writing blog posts on their personal blogs they should first tidy their house and/or pursue serious legal action.

In the land of iROKO I guess restructuring means getting out of a sector. Nigerian artists please beware of iROKO Partners apparent commitment to developing the digital distribution space. (Please see attached screenshot) 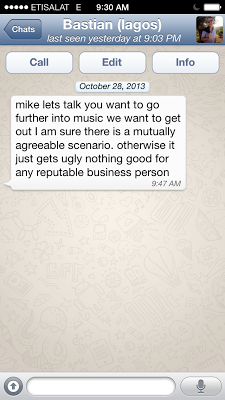 In the Ventures Africa blog post I was fortunate enough to read Jason Njoku’s mention of a 6 week “generous” severance package for iROKO staff however to date all the iROKO staff affected in this saga have not received such. I implore serious investigative journalists to verify his claims. Seek out former staff and ask questions.

I believe that Jason Nkoju has possibly spent far too long distributing Nollywood films online so much so that some of the sensationalist story lines influence him.

If iROKO Partners wishes to pursue legal actions I suggest they do such or I will see this is flagrant defamation of character.
Last year iROKO Partners Lagos had circa 80 staff, now there are circa 15 remaining. At a time many of us were loyal to the iROKO cause, however serious structural issues have arisen so much so that many have felt it safer to find employment elsewhere. I wish the remaining staff members and management the best of luck in their future endeavours.

Thank you for all the phone calls and text messages showing concern.

I am working on something rather exciting and will be announcing my next venture in the coming weeks.
Posted by Connoisseur at 05:56