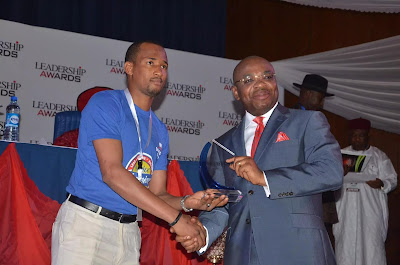 The board and management of LEADERSHIP Newspapers Group Ltd have shifted this year’s LEADERSHIP Conference and Awards from Thursday, March 16 to Friday, March 17. The venue remains the Abuja International Conference Centre.
The shift became necessary as the National Economic Council, NEC meeting, is slated for March 16. The meeting is chaired by the vice president with the governors of the 36 states as members. Some of the governors are slated to receive award at the LEADERSHIP event.
The theme of this year’s conference is “The Rice Economy.” In keeping with its tradition of celebrating excellence among individuals and organisations in various fields of human endeavour, the board and management of LEADERSHIP Group in December, 2016, singled out some entities and personalities, who distinguished themselves over the period for award. For all they were able to do and achieve in 2016, three illustrious personalities, namely: Senator Abubakar Bagudu (governor, Kebbi State), Mr Godwin Emefiele, (governor, Central Bank), and Mr Ibrahim Magu, (acting chairman, Economic and Financial Crimes Commission, EFCC) were nominated for the award of “LEADERSHIP Person of the Year.”


In choosing the three personalities, it was noted that Governor Bagudu is today seen as number one ambassador of local rice in the country, given the unprecedented production of local rice he pioneers from Kebbi State.
Emefiele made it for CBN’s massive support of agriculture, especially with the ANCHORS borrowers’ scheme, and the dexterity he has employed in driving the nation’s monetary policies in this period of recession. Magu, the anti-financial crime czar who drives the EFCC-the country’s foremost anti-graft agency- made it for his unflinching tenacity on the job and the results he is getting for his efforts in the face of relentless antagonism from influential quarters, The threesome of governorsWilly Obiano (Anambra State), Emmanuel Udom, (Akwa Ibom), and Abubakar Bindow, (Adamawa State), emerged the “Governor of the Year.”
Governor Obiano made it for his agricultural revolution in the state, as well as his remarkable attention to infrastructure development, empowerment and security in the state. Governor Udom stands out for his strides in rural development as well as infrastructure uplift of the state, and for the success of his “Dakkada” governance tagline.
Governor Bindow was chosen for his remarkable successes in his efforts to put Adamawa on the path of economic self-reliance, in the manner, yet to be seen from a northern governor. The award of “Politician of the Year,” went to Comrade Adams Oshiomhole, former Edo State governor. The “Public Service Person of the Year” award went to the acting managing director/chief executive officer of the Bank of Industry, Mr Waheed Olagunju.
The “Banker of the Year” award was bagged by the group managing director/chief executive officer of First Bank Plc, Dr Adesola Kazeem Adeduntan. The “Business Person of the Year” award was won by the chairman of SHOPRITE Nigeria Limited, Chief Tayo Amusan.
The “Bank of the Year,” award was clinched by Sun Trust Bank, while the Nigerian Communications Commission, NCC, won the “Government Agency of the Year” award. The “Company of the Year” award was won by Okomu Oil Palm Plc, while Dana Airline Limited won the “Brand of the Year” award.
The “Telecoms Company of the Year,” went to Smile Communications Nigeria Limited. The “Product of the Year” was clinched by Power Oil-the latest brand of cooking oil from the stable of Dufil Nigeria Limited. The “CEO of the Year” was bagged by Mrs Funke Opeke, managing director/CEO of Main One Cables, while the “E-commerce Company of the Year,” went to Yudala.com-a retail trading portal. The “Artiste of the Year,” award was this time, clinched by Augustine Miles Kelechi, popularly known as Tekno- an Afro Pop and RnB rave of the moment- highly celebrated for his hit song, “Pana.”
Miss Faizal Abubakar Sani, from Kano State, who had the overall best result in the May/June, 2016 Secondary School Certificate Examinations, (WASSCE), won the “LEADERSHIP Outstanding Young Person of the Year.” Faizal scored A1 in all the nine subjects she sat for in the exam. The Nigerian paralympians, who did the country proud in the Summer Paralympic Games, held in Rio de Janeiro from August 5 to 24, 2016 won the “Sports Persons of the Year.
Posted by Connoisseur at 03:23