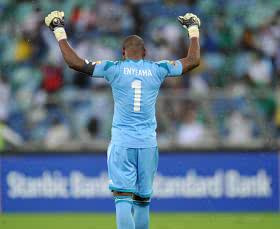 Plan by the Akwa Ibom State government to host the victorious Super Eagles in the state has been stalled by the absence of the team’s shot stopper, Vincent Enyeama. The Eagles’ Vice Captain was to lead his teammates to his state of origin but he had since opted to return to his club in Israel in a bid to return to club’s starting XI. The absence of other foreign based stars also prompted the state government to reschedule the victory party. It could be noticed that when Guinness Nigeria hosted the team in Lagos, only Chigozie Agbim, Sunday Mba, Fegor Ogude and few other home based stars were present.

Akwa Ibom State Information Commissioner, Aniekan Umanah says the plan is to have the indigene of the state, who wore the captain’s arm-band in the final, Vincent Enyeama around when the team is hosted. “Also Governor Goodswill Akpabio is presently out of town and we have to reschedule the hosting to accord the team its pride of place.”
The team is now expected to be hosted by Governor Godswill Akpabio during the World Cup Qualifier on March 23, 2013 which will be played at the U.J. Esuene Stadium, Calabar.
It will be recalled that last week Delta and Lagos held lavish welcome parties for the Eagles in Asaba and Ikeja, doling out cash rewards for the team and its officials.
Posted by Connoisseur at 02:34