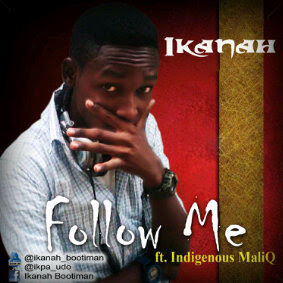 ‘Follow Me’ is the official debut single of fast rising music star Ikanah. The track features his former partner Indigenous MaliQ and is produced by OtynO, mixed and mastered by O'giveR. Ikanah a.k.a Bootiman, Born as Prince Etienam Umoh in Satellite town, Lagos State, Nigeria, Hails from Akwa Ibom State. He is a talented singer, song-writer, and performer. He kicked off his career professionally in 2010 with the fast rising indigenous rapper 'Indigenous MaliQ', they formed the now defunct group 'TUBEEZ' which released d Efik Version of Ice Prince's Oleku and a host of other songs.


He has harnessed his singing and song-writing skills by working with top Nigerian acts like Kelly Hansome, Major Bangz, Pasha,EmmyAce, Ijeoma, Mbryo and a host of others.