Pope Francis’ cutest fan rushes to stage for a hug 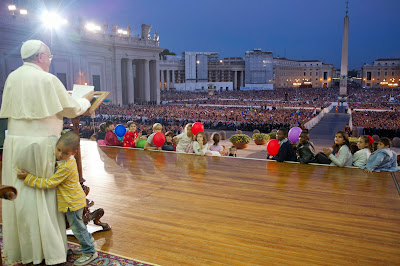 A young boy wandered onto the stage at the Vatican this past weekend, hugging Pope Francis as he tried to give a speech. The boy, who looks about 6, was originally sitting on the steps near the Pope, while Francis listened to followers address him at the Vatican's Year of Faith Celebration. Boys will be boys, and this one wanted a closer look at the man in the robe. So, he wandered up to give a personal hello. But the boy's misadventure didn't end there. He kissed the cross around the Pope's neck. 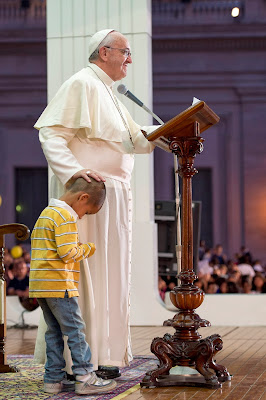 And refused to be ushered back to his seat and, as other people came on stage to greet the Pope, the boy did his best to keep them from honing in on his new buddy, the Pope. Eventually Francis convinced the child to take a seat. But he didn't go back to his spot on the steps. Instead, the rambunctious youngster sat on the Pope's chair while he continued his speech.

Source: Yahoo
Posted by Connoisseur at 09:49