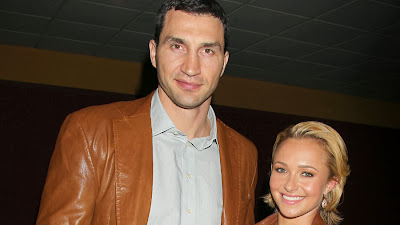 World heavyweight champion Wladimir Klitschko and Hayden Panettiere are engaged, the American actress has confirmed. Romance blossomed between Klitschko and Panettiere in 2009 but there was trouble in paradise two years later and they went their separate ways, before rekindling their relationship earlier this year. And on Wednesday Panettiere confirmed rumours of their engagement were true, four days on from Klitschko's successful defence of his world titles against Alexander Povetkin in Moscow.


The 24-year-old actress, who starred in US drama Nashville, was sporting a large ring on her finger on daytime talk show Live with Kelly & Michael. When host Kelly Ripa commented on it, Panettiere replied, "I think it speaks for itself". Ripa then asked her if she was engaged, and Panettiere replied "I am", though added that no wedding date has been set.

Source: ESPN
Posted by Connoisseur at 07:03