TV personality Iniobong Monday: I cried for many nights when my wife-to-be, Emem Ndem left me when we were dating 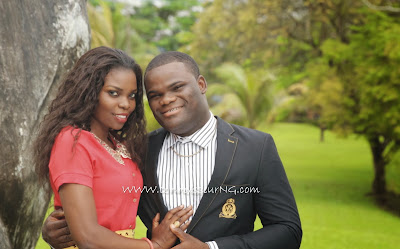 Theirs is one of the finest love stories of the modern era. A story of genuine love, friendship, hurts, tears, break-ups, and make-ups spanning about 8years. Now, they have decided to take it to another level by walking down the aisle. Popular On-Air-Personality, Iniobong Monday will be tying the knot with his longtime sweetheart Emem Ndem on the 20th of October, 2013 at Church on the Hill International, Uyo, Akwa Ibom State. The beautiful couple sat down with IFREKE NSEOWO (Record Holding Nigeria’s Youngest Editor) to share their interesting love story. Read on….

How did you meet her?
Iniobong Monday: It was on a Tuesday, 4th of January, 2005. I went to school to seek admission in to the University of Uyo. I went to my potential department, Communication Arts  and I saw 5 ladies standing. I was quite young. I think I was 19 at that time. I saw one dark, tall, slim and gorgeous lady standing. I’ve never been that confident all my life, walking up to five ladies and excusing them to speak to one of them. It was some guts for a 19/20 year old. I spoke with her, we got talking, got to know each other. Like they say, the rest is history.


Did she give you tough time?
Iniobong Monday: Hers was a bit of unusual kind of friendship. I spoke with her on the 4th of January, 2005 and the next time we spoke again was April 2006. We were always on hello, bye, hi level.  The babe no give me face at all. I had a classmate who used to like her a lot, and the guy used to tell me he likes her, and I couldn’t say anything. At a time I was sure I wanted to make friends with her but you got into school and you are 19/20, you say I came to school to study and not for boyfriend/girlfriend thing. But on the other end, you wanted a company, someone you could relate with and she quite fitted the bill. But nothing ever warranted us talking to each other again and it was very difficult. In April 2006, circumstance brought us close. We were standing five of us, and I can still remember the five of us. It was me, a classmate Idy Bassey, another classmate Iniodu Idiong, one of her classmates Emaeyak and her. I can’t recall what we were discussing and one after the other they were just leaving and it ended up being me and her. We began talking. We were friends for a very long time before the relationship actually started. I’m sure she can confirm this, no one asked anyone out.  Something like ‘would you be my girlfriend?’ or ‘would you be my boyfriend?’. I remember in February 2007 we were inside the TV studio, I told her I love you. That was the first time I ever told a woman I love you and I meant it. It came from my heart. She was sitting somewhere and I just whispered into her ear and said I love you. She pretended as if she didn’t hear. She replied ‘what did you say’?. I told her again ‘I love you’ and she smiled and the next thing that came out of my mouth was ‘but with the love of the Lord’.  (laughs). It was very funny. She turned and told me ‘’I love you too but with the love of the Lord’. But deep inside us we knew the Lord had nothing to do with this. It flowed naturally. We’ve shared so much together apart from intimacy especially friendship. We could talk for 5 hours and you begin to imagine what we are talking about. School will finish by 5pm and we’ll leave by 9pm. It was such camaraderie between us but we were not dating, there was no relationship, it was just pure friendship, mutual respect and affection for each other which we didn’t quite take to the next level. People we asking and she will give them this phrase “we are just friends” and people will ask “what kind of friendship is this”. Something led to something and we started dating.
What was on your mind when he walked up to speak to you that first day?
Emem Ndem: At that time I just finished my diploma. So like he said, I was with four of my friends. I noticed he was staring at me. In my mind I said who is this Jambite that is staring at me? He walked up to me and said excuse me. And the reaction on the faces of my friends was like ‘who is this Jambite, you no dey fear face?’.  I didn’t want to be rude to him so I gave him a few minutes to talk and he sounded very interesting. At least the first thing I noticed in him was that he could speak English very well. I can’t recall what happened after that but it was always hello, hi, wassup.
After apart from his good command of English, what drew you close to him?
No, there wasn’t any attraction. He approached me so there must have been something that made him come for me but for me the initial reaction was why does he want to talk to me? But after that first time, I noticed he was a nice person. We got to talk again after 1 year and four months and that is when the likeness began. 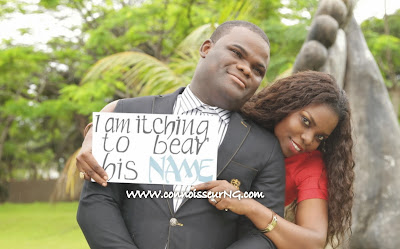 What made you gun for her?
Iniobong Monday: I notice something about her. She is stylish. Among the 5 of them that were standing that first day I approached her, she was the only one who wasn’t too much. They say beauty is in the eye of the beholder but at that time it wasn’t about beauty because she was in the midst of other girls who were very beautiful. It was just a natural attraction, I don’t know. That is why I call it fairy-tale. Sometimes I try to use the word ‘destiny’. I just saw her and I liked her. At 19/20 you are not sure of the kind of woman you want. You just want a girlfriend. I came from a different side of the divide. You stay at your father’s house, you go to church all the time, you don’t touch a bottle of beer, if my father sees you talk with a woman you are going to get 30 lashes on your back, and all of that. So I came from that kind of home, so seeing a young woman as stylish as she is, that natural attraction just came and thought we could be friends. Sincerely, I wasn’t thinking of a relationship. I like making friends with women, I get to learn a lot from them. I try to choose my friends, I don’t let my friends choose me. Nothing relationship was lingering in my head, I just had in mind to be friends with her and she happens to be very first person I spoke with in the University of Uyo.
He says he likes making friends with women. Don’t you get jealous when he does that?
Emem Ndem: It’s not about jealousy. I think we have an understanding. For anybody to feel threatened in a relationship it means the other party is giving you reasons to. I understand the kind of person he is. He likes to talk to women and it is okay by me. He doesn’t do it in a way that it affects me. It won’t go out of the boundary to do something to offend me.
As a TV personality, he has many female admirers. So how does that make you feel?
When issues like that come up, I don’t have business with the fans, I have business with him. He is a straightforward man. He is very disciplined so I know he won’t misbehave. It’s funny but the way women flock around media personalities is shocking. They come in their droves but I don’t have a problem because I know he knows when to draw the line.
Since you were in the same department in school, did your relationship affect your studies?
Iniobong Monday: It affected our studies bigtime. I have a lot of confessions to make and it’s gonna offend a lot of people. There were times I felt that hanging around her was much more profitable than attending a boring class (laughs). I’m sure if my lecturers hear this they will skin me alive. You don’t want to attend a boring class, you just want to be with someone who will make you laugh, smile, play. It is like when you see a 5year old child playing with another 5 year old, you see the freedom, the excitement, they are really letting loose of themselves, they are not scary. That is the kind of friendship I share with her. Lecturers saw it, colleagues saw it and they thought this guy doesn’t know what he is doing. They used to say it in Ibibio, ‘iwuod imaha nwed’ and we used to laugh about it. I am a very expressive person, I’m daring, adventurous. When I love I try to show it, I don’t pretend about it. I don’t mind losing my dignity because of love. I can kneel down anywhere for my woman. I can kneel down at the stadium or Eagles Square for my woman and I mean it. I can kiss and hug my wife any where. A lot of people thought we were trying to play to the gallery or put it in people’s eyes or we were over-doing it but for me there was never a time I said let me do it for the next man to see. I didn’t care about anybody. It was all about being happy and as long as my wife doesn’t have an issue with it then nobody should have an issue with it because it is a relationship between two people. Relationship is not something you seek people’s opinion, it is about compromise. Our lecturers didn’t like the fact that we were flaunting our relationship in front of people. If she was in the class and I’m done with mine, I will come and hang around her class and wait for her, and her colleagues will be like ‘dis kain guy, him no get wetin to do?’. 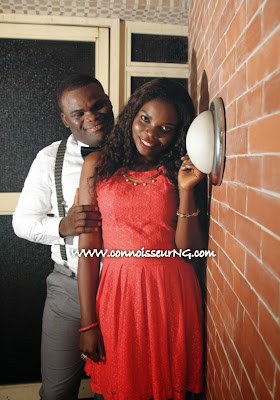