Demise of Digital Brass Band: No more business as usual for Joe Akpan and Aniekpeno Mkpanang 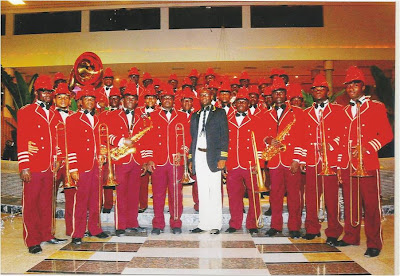 If information reaching CONNOISSEUR is anything to go by, then it is no more business as usual for Joe Akpan, and his boss Aniekpeno Mkpanang-the Director of Protocol to the Akwa Ibom state government.
If you were at the 2012 edition of 9,999 annual Christmas Carol, you will observe Joe Akpan’s absence, the renowned musician and his Digital Brass Band was replaced by a 200 man classical choir and a 100 man orchestra.


Born Salvationist and musician of international repute, Joe is the son of the Territorial Commander (General Overseer) of The Salvation Army in Nigeria, Joe founded the DIGITAL BRASS BAND that was responsible for the orchestration of music during the annual Christmas Carol Night, he was instrumental to the maiden edition of the Christmas Carol in Akwa Ibom state which etched the name of Akwa Ibom on the Guinness Book of World Records stone.
The Governor of Akwa Ibom state fell in love with the stunning performances and stylishly designed uniform of the unique band. At some point in time, there was no major event held in the state without the performance of the Digital Brass Band. Years after, Joe was appointed a Personal Assistant on Protocol to further create a platform for him to use his talents and creativity to serve the state better.
News has it that Joe fell out of favor with his boss Aniekpeno Mkpanang who had invested millions of naira in the Digital Brass Band. It was rumored that Joe Akpan was cheating the members of his band, and when the news got to his boss, he was so embittered that he had to shut the band down.
Joe was not the only person missing at the 9,999 Christmas Carol in Akwa Ibom state this year, AK-7, the musical group comprising of Ekpotu, Mista Xto, Ann Inyang, Fadabasi, Aniekan Safro, Pasto Goody Goody, and Aity Dennis Inyang was not at the event. In previous editions, the music group used to render special Christmas songs.

PIX: Joe Akpan (middle) with his Digital Brass Band
Posted by Connoisseur at 01:58