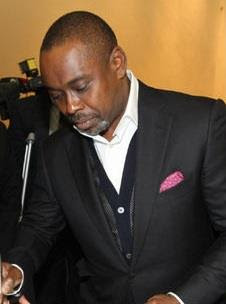 It is now an established fact that if he doesn’t chicken out at the last minute, the young billionaire owner of Desicom Engineering, Mr Akan Udofia has jumped into the murky water of politics.
According to information reaching yemojanews.com, the moneybag who is in his mid 40s has decided to contest for the 2015 governorship race of his home state, Akwa Ibom.
Very close associates of the Big Boy confided in us is that the strategy is to use the political structure of incumbent governor of the State, Godswill Akpabio to get to the post.


The source told us emphatically that, all things being equal, Gov. Akpabio has anointed Akan Udofia as his successor. And expectedly, the political landscape of Akwa Ibom is already shaking as some of the big contenders for the top job are already seeing Udofia as their political enemy.
The gang up against Udofia in the power circle is not only because he has been endorsed by the incumbent governor, but the sentiment that he comes from the same senatorial district with the immediate past governor of the State, Sir Victor Attah which is the Uyo Senatorial district.
Akwa Ibom is made up of three senatorial district, Uyo Senatorial District, Ikot Ekpene Senatorial District and Eket Senatorial District. While Uyo district produced ex-Governor Attah between 1999 and 2007, the incumbent, Gov. Akpabio is from Ikot Ekpene Senatorial District. Politicians from Eket Senatorial District have been shouting atop rooftops that it is their turn to produce the next governor in 2015 in the interest of equity and fair play.
Barrister Effiong Abia, the incumbent commissioner for Local Government and chieftaincy Affairs in Akwa Ibom is from Oron Local Government in Eket Senatorial District. There are talks in government circle that he is eyeing the governorship seat and he is campaigning seriously that his district be allowed to produce the next number one man of the State.
Another big gun from Eket district who wants to be the governor is Bishop Samuel Akpan, the Chairman of Akwa Ibom State Road Maintenance Agency. Bishop Samuel is deep rooted in the State political game as he was the immediate past Deputy Chairman of the ruling People’s Democratic Party (PDP) in Akwa Ibom.
Meanwhile, Akan udofia is not the only contender from the Uyo District, yemojanews.com learnt that the Secretary to the State Government (SSG), Umanah Okon Umanah as well as Senator Effiong Bob who represents Uyo District in the National Assembly are already oiling their political machines for the guber contest in 2015.
A prominent politician who spoke with yemojanews.com opined that, though Eket district has not produced governor and it will be fair if the people of the area are allowed to produce the next governor,  but political power play and interest may not allow it to be.
“It is very slim for Eket people to produce the governor because they don’t have a generally acceptable candidate. Like Barrister Effiong Abia you mentioned is from Oron Local Government which is a minority in Ibibio land. And the senatorial district is at disadvantage when compared to others in terms of population. The Uyo District is the majority and that is why aspirants always come out in droves from the place’, the source explained.
However, despite the fact that Udofia who flies around the world in his private jet has been endorsed by gov. Akpabio, skeptics believes he cannot become the next governor.
“Firstly, Udofia lives in Port-Harcourt (River State) and does not connect with the grassroots people in Akwa Ibom. Secondly, the entire politician in the State will gang up against him because he is not one of them. Thirdly, he doesn’t relate with people. He is sort of arrogant because he is from a very rich background. Lastly, the politics of Akwa Ibom is too versatile for a person like Udofia. So, he doesn’t have the qualities of a governor in Akwa Ibom. Akan Udofia should just concentrate on helping Gov. Akpabio keep his money and businesses”, the source revealed.

Posted by Connoisseur at 13:27