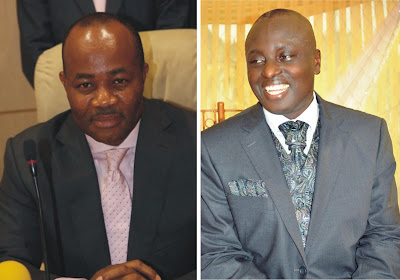 Ever since I posted the front page of the edition of Global Concord that carried this story, they have been calls for the main story to be published here as several readers of this blog have been unable to lay their hands on the paper, especially those residing outside the country. People say that this paper’s reports are always false but not all the time. I take exception to this particular report, that’s why I even had to post the cover HERE. I actually heard gists like this many months ago and even if this report may (in quote) not be totally correct, there is some iota of truth in it. I reproduce the news report below:

Generally, politicians and those in the corridors of power are believed to live a life of indulgence and abuse. They survive by covering up their tracts or using the pegs and trimmings attached to their offices to prevent their misdeeds going to the public domain.
Threats and intimidation which they sometimes make good are tools they use in whipping whistle blowers including the press into line. Sometimes, they run out of luck as what they do in the dark gets to be seen and known on the housetop.
That’s exactly the case with the chilling, gory and somehow thrilling revelation of Comfort and Maria (not real names) who earlier on worked with Akwa Ibom State Ushering Group as Ushers.
That group stinks with allegation of sexual pervasion not known in recent history and Akwa Ibom State government can only save its face if it calls for an immediate probe into what happens at her protocol department with a view to punishing the culprit(s) and restoring sanity and decency there.

As news of the scandal is filtering into public ears, some of the ushers have resigned their offers while others have been hounded down believably for revealing the longstanding secrets of the group.

Comfort resigned her offer not long ago. She came with a confession on the workings of the group which is controlled by a former ace radio presenter and anchor of a fan-commanding history programe which ran Sunday evenings in one of the radio stations in Uyo, Akwa Ibom State Capital, (name withheld by us).

Comfort in a down-to-earth, no-hole-barred manner, tells stories of sexual orgies, lesbianism, group pervasion and lastly, sex ritualism performed on most innocent girls in the ushering group by the man whose brilliance and sense of time, history and encyclopedia has at various times got him a place in Aso Rock and Akwa Ibom State Government House.
In this report, our sources take us into the inner circle of the ushering group and reveal its most dark secrets. It tells the story of how one man has allegedly condemned the future of hundreds of innocent girls and turned them into sex slaves.

That is not all. The indulgence, according to our informant, has occultic interpretation as well as the rituals performed on the greedy but willing accomplice. Lastly, it reveals how state funds are lavished by an individual in the most criminal manner.

As earlier promoted, we publish for your reading and information, extracts with little moderation (in italics) from the confession of Comfort, (not real name) a former member of the Akwa Ibom State Ushering group.

MY STORY AS AKSG USHER – Comfort
I have decided to come out to the whole world with this story because I believe it can save the life of one innocent girl. If the ones in the group are beyond saving, at least, I hope that this confession can act as a warning to those innocent girls outside, who are constantly recruited into the Ushering group to meet the demand for more souls.

Parents must be watchful over their children and beware of sudden wealth by little girls who were sent to school, or God will hold them accountable for the fate that befalls their children.

I joined the ushering group late last year, (2011) hoping to augment my income. The money was good, and since my benefactor had passed away, I saw it as a way to help relieve the burden on my mother. We were more than 40 girls or there-about at the time.

During that event, I made about N350, 000.00. I had never seen that kind of money in my life, I thought it was God-sent. We were later taken to the man’s house in Abak, called Arbark Cort and where given alcohol, and all manner of things. We danced and partied the whole night. From that day, my life changed.

Then our group leader, named Rodar (not real name) started taking us to the man’s house located on Unit A…, Ewet Housing Estate which is the centre for most of the atrocities. Initially, nothing happened. We just go there dance, the man will encourage us to get drunk, eat and by the next morning he pays us between N20,000 – N50,00 each.

From 12midnight, the house was always filled with women, young and middle aged; married and single. Then I would just go, but I noticed that most of the girls never left the house. The girls called themselves house-mate and the man Big Brother.

The frequency of going to his house started increasing. He lavished expensive gifts on us, started sending us abroad, some girls would go to Ghana, others South Africa, some to Dubai and others to London. We lodged in the most expensive rooms of big hotels, Francis place, Le Meridien, when in Uyo and the most expensive hotels whenever we are going outside Uyo.

In one of the hotels we lodged, I was surprised to see that one of the suit we stayed in cost over N250,000.00 per night. I thought I was in paradise. We were given blackberry phones, Ipads, laptops, anything money could buy. All we had to do was just ask, then do as he wishes.

Back in Uyo, things started changing. The frequency of going to his house started increasing, the money we made doubled. In fact, at a point, some girls where making more than N500,000.00 a weekend.

Then the dancing changed. More girls were being constantly brought in. Most times, when we get to his house, we had to be naked, dancing and drinking naked. Imagine the site of so many girls naked, drunk and dancing. The money was tripled at this point.

New girls were constantly brought in to join, even married women were part of the fun. Stories of Lesbianism started making the rounds in the group. The man will bring in lesbians from outside the state to entice us to practice it.

He celebrates birthdays for each of the girls. In fact, the things that happened during the birthday celebration of one of the girls Comfort, (name real name) which took place in his house at Abak would make decent people to vomit. Some of the girls, to gain additional favours, would quarrel; fight each other in order to gain his attention.

Money was never a problem; he constantly told us we could make more money if we behaved. We had so much money to spend. Some girls bought cars and others opened shops. Then I lived like a real big girl. I could buy anything I wanted.

It was during this time that a friend invited me to church. I am not really a church type, but I think God wanted to open my eyes. While in the church, the prophet came to me and asked me to see him after the service. I have never met this man before so I was curious.

I went to see him the next day privately and when he saw me, he just stared at me for over 10 minutes without saying a word. I became uncomfortable and wanted to go out.

Then he started speaking. The first thing he said was: “what does it profit a man if he gains the world but loses his soul?” He continued: “someone is taking your star and your future. You have been initiated into the occult kingdom and you need the grace of God to break from that bondage”.

He told me things about the man that I had never imagined or taken note of. He described perfectly well the things I did while in the group. He went as far as to tell me that because of our sacrifice, the man’s rank has been increased in the occult world. He even described the changes in furnishings in his house and the significance of each item.

The prophet also exposed how sexual ritualism has become rampant now, especially for politicians. Here, they (politicians) sleep with as many women as possible, without using protection to facilitate the exchange of blood.

Once they have slept with you, your future becomes tied to them and you can never succeed in anything without them. They take your star, they also take the stars of any person that you have a relationship with.

I had always suspected that there was something wrong about what we did but I never thought I had been a willing sacrificial lamb. Finally, he asked me to make a public confession of the things I have done, that God will forgive me. So that is why I’m sending this story.

I want our young girls to be aware of this people. Most especially, I want parents to have the strength of character to resist easy money brought home by their young children who were sent to school so that they can properly advise them about the dangers.