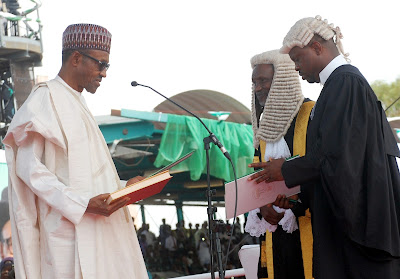 British Broadcasting Corporation (BBC) yesterday published 16 powerful quotes from Africans which it considered the best in the year 2015. President Muhammadu Buhari’s "I belong to everybody and I belong to nobody" topped the list. See full list below:


1. "I belong to everybody and I belong to nobody"
Nigeria's President Muhammadu Buhari on the day of his historic inauguration in May

2. "We must change our lawless habits, our attitude to public office and public trust. We must change our unruly behaviour in schools, hospitals, market places, motor parks, on the roads, in homes and offices… “To bring about change, we must change ourselves by being law-abiding citizens"
President Buhari said four months later on Nigeria's independence day.

3. "The time for vision has come. I request our South African government to help us clean our land of lice. We need to remove all itching bedbugs and lay them bare in the sun. “We request that all foreigners should take their baggage and be sent back"
South Africa's Zulu King Goodwill Zwelithini, who denied that his comments in March fuelled xenophobic violence

4. "If I had known this lion had a name and was important to the country or a study obviously I wouldn't have taken it. Nobody in our hunting party knew before or after the name of this lion."
US dentist Walter Palmer, who killed Zimbabwe's famous Cecil the lion in July

5. "Dear white people in the fashion world!... Why do I have to bring my own make-up to a professional show when all the other white girls don't have to do anything but show up. "Don't try to make me feel bad because I am blue-black - it's 2015"
South Sudanese model Nykhor Paul, who got more than 20,000 likes on Instagram after she posted the comment in July

6. "I have seen more demonstrations and strikes in my first two years. I don't think it can get worse. It is said that when you kill a goat and you frighten it with a knife, it doesn't fear the knife because it is dead already. I have a dead-goat syndrome"
Ghana's President John Mahama, being dismissive in March of the protests against his government. The quote has earned him the nickname "The Goat"

7. "This is surreal for me, I'm not going to lie, growing up in the dusty streets of South Africa, I never dreamed that I would one day have two things really: An indoor toilet and a job as host of the Daily Show.  "And now I have both, and I'm quite comfortable with one of them".
South African comedian Trevor Noah as he made his debut hosting Comedy Central's satirical news show in September

8. "I've just concluded - since President Obama endorses the same-sex marriage, advocates homosexual people and enjoys an attractive countenance - thus if it becomes necessary, I shall travel to Washington DC, get down on my knee and ask his hand"
Zimbabwe's leader Robert Mugabe, mocking a US Supreme Court decision in June to legalise gay marriage

9. "I love my work. But under our constitution, I cannot run again... I actually think I'm a pretty good president - I think if I ran I could win. But I can't. “When a leader tries to change the rules in the middle of the game just to stay in office, it risks instability and strife - as we've seen in Burundi. Nobody should be president for life"
US President Barack Obama on his visit to Ethiopia in July

10. "We are going to create a special wheelchair for President Mugabe until he rules to 100 years because that is what we want. That is the people's choice. We want a leader that respects us"
Zimbabwe's first lady Grace Mugabe in November, after her 91-year-old husband was caught on camera struggling to walk

11. "The way to treat a boil is to squeeze it out, and I have made it my responsibility to do that. I know squeezing out a boil hurts but unfortunately there are no two ways about it"
Tanzania's newly elected President John Magufuli, telling parliament in November about his drive to root out corruption and lazy workers

12. "I organised a meeting in 2005 to solve our family issues. When I asked them about their opinion, they said I should build each family member a house and give each of them a monthly wage... I just want other African families to learn from this"
Togo football star Emmanuel Adebayor, denying in a Facebook post in May claims that he failed to support his family financially

13. "Christians and Muslims are brothers and sisters. "Together, we must say no to hatred, no to revenge and no to violence, particularly that violence which is perpetrated in the name of a religion or of God himself. God is peace, God salaam."
Pope Francis on his visit to a mosque in the Central African Republic in November

14. "Relaxing your hair was a rite of passage. My hair suffered a lot with those chemicals and I cut it all off and my hair grew and I realised it wasn't that bad after all"
Kenya's Oscar-winning actress Lupita Nyong'o told the BBC

15. "A court is the guardian of justice, the cornerstone of a democratic system based on the rule of law. If the state  does not abide by court orders, the democratic edifice will crumble stone-by-stone until it collapses and chaos ensues"
Judge Dunstan Mlambo, who criticised the South African government for letting Sudan's President Omar al-Bashir leave the country in June despite an International Criminal Court arrest warrant

16. "It's not about unmasking Anas. It's about all of us putting our hands together and ensuring we have a better continent. I think that anonymity has always been my secret weapon and I have always used it to the benefit of society"
Undercover journalist Anas Aremeyaw Anas, whose documentary this year exposed corruption in Ghana's judiciary
Posted by Connoisseur at 05:46