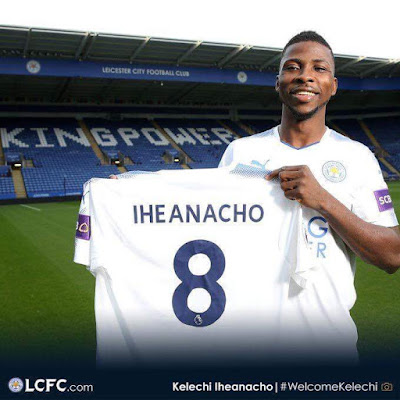 Leicester City Football Club has completed the signing of striker Kelechi Iheanacho from Manchester City for an undisclosed fee. The 20-year-old Nigeria international has put pen-to-paper on a contract to 2022 and becomes the fourth exciting addition to Craig Shakespeare’s squad ahead of the new campaign.
Iheanacho will wear the squad no.8 and joins fellow Nigeria internationals Wilfred Ndidi and Ahmed Musa among the Leicester City ranks, as the team continue their pre-season preparations with a friendly at home to German side Borussia Monchengladbach on Friday night.

The striker, who is regarded as one of the most promising young talents in the Premier League, could make his first appearance in City colours at King Power Stadium in City’s final pre-season fixture.
Speaking to LCFC TV, Iheanacho said: “It feels good and I’m happy to be part of this team. I know the ambition of the team and speaking with the manager, he let me know what I need to do – to help the team achieve what they want. I was convinced and I’m happy to be here.
“I was happy speaking with the manager, knowing what the team wants. It gives me more confidence that I will fit in this team and hopefully I’ll achieve a lot.”
Leicester City manager Shakespeare added: “It’s a great signing for us. Kelechi is an enormously talented player that has shown a huge amount of promise at every level in which he’s played.
“We’ve tracked his progress for some time, so we know how much quality he’ll bring to the squad. He’s young, he’s hungry, he’s ready for the next stage of his development and I’m delighted that will be with Leicester City.”
Kelechi is a player of proven Premier League pedigree and he joins a Leicester City strike force bursting with talent ahead of the new Premier League campaign, which kicks off away to Arsenal on Friday 11 August.
He arrives with an outstanding record in domestic and international football, having represented Nigeria with distinction at Under-13s, Under-17s, Under-20s and senior level, while he progressed rapidly through the ranks at Manchester City.
The Manchester side secured his signature ahead of a host of Europe’s elite clubs after Kelechi’s displays for Nigeria Under-17s in the U17 World Cup earned him the FIFA Golden Ball award and saw his country crowned world champions – scoring six times and grabbing seven assists in the process.
From that point, things moved quickly for the youngster. He soon began scoring goals for Manchester City’s Academy, trained with Columbus Crew in the United States, scored in the 2015 FA Youth Cup Final and netted the only goal against Porto as his team lifted the 2015 Premier League International Cup.
Another series of eye-catching displays in his team’s 2015/16 pre-season saw the young striker called on for first team duties for the first time in August 2015 – making his professional debut as an 18-year-old in a 2-0 home win over Watford.
His first goal came against Crystal Palace a few weeks later while he underlined his promise with a stunning FA Cup hat-trick against Aston Villa in January 2016. He was used mainly as a substitute in his first season of professional football, but despite making 11 starts, he still managed to end the campaign with 14 goals in all competitions.
Iheanacho continued to build on his impressive reputation in front of goal last term as he scored his 10th Premier League goal before the age of 20, found the back of the net in the UEFA Champions League and only narrowly missed out to Bayern Munich’s Renato Sanches for the FIFA Golden Boy award.
At senior international level, Iheanacho made his Nigeria debut in 2015 and despite his young age, has firmly established himself as a key man for his country. In just 10 appearances, he has scored six times – most recently in a friendly victory over Togo in June.
In total, Iheanacho has scored 12 times in the Premier League during 46 appearances (12 starts) while he has 21 goals in 64 games (20 starts) in all competitions for Manchester City.

Posted by Connoisseur at 13:26