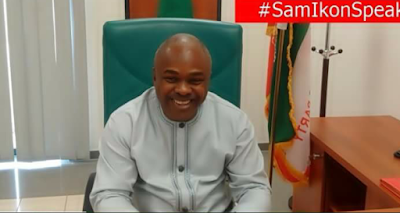 The CEO of Bush House Nigeria, Akparawa Michael Bush has blast the Member Representing Etinan Federal Constituency in the National Assembly, Rt. Hon. Sam Ikon for using foul language against TheMail Newspaper. The newspaper outfit had published a news report where Ikon’s constituents gave the lawmaker bashings for not empowering the people he represents.


In his reaction to the report, Sam Ikon responded thus: “My attention has been drawn to another propaganda stunt in The Mail "newspaper" by those who are yet to wake up to the realization that no amount of lies swallows truth eventually. Two factors may constitute their headache. First is that the author may be in urgent need of psychiatric evaluation or secondly, the massive success and impact of my last weekend briefing of stakeholders in Nsit Ibom and Etinan LGA's who were pleasantly impressed with my performance might have startled them to the reality of the imminent failure of their project thus eliciting the madness and stupidity so published. I wish to assure my constituents and the general public that this falsehood and several others to be published by these agents will not deter me from delivering on the mandate so freely given to me by the people of Etinan Federal Constituency. As from the days of old their works will find them at the right time. Your mandate is working. To God be the Glory.”
In his reaction, Bush asked the former Speaker of the Akwa Ibom State House of Assembly to apologize for using foul language in his rejoinder.
“This parliamentarian should apologise for the hate and bitterness dripping from his foul language: 'psychiatric ..., madness and stupidity'. Leaders or holders of public offices must defeat themselves and forcefully stay within the confines of sane speech and protocol. We, the people, don't deserve any less. In fact, I think the time is now for Nigerian public servants to hire publicists, etc., to handle their public communications and relations! ...B”, Bush wrote.
Posted by Connoisseur at 08:57