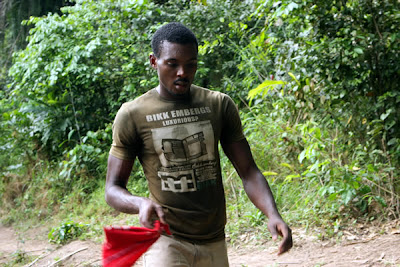 Akwa Ibom’s Ifet Iniobong has been evicted from the on-going GUS 9. He was evicted after failing a blindfold puzzle. Below is how his eviction took place:
In the episode 22 of the reality TV show, the 6 remaining survivors were about having breakfast when Chidi Mokeme, the Anchor man appeared at their camp. In his hands were pieces of coloured cloth and a rope. They were ordered to blindfold themselves while he led them with a rope out of their camp. This was the first time in the history of Gulder Ultimate Search that the task would commence right from their camp.
Speaking became forbidden immediately the coloured clothes covered their faces. They were told even attempting to touch the cloth, with their hands would earn any culprit eviction. The Blindfold challenge was undoubtedly the most technical puzzle the survivors had to solve since their sojourn in Gulder Ultimate Search 9.
The survivors were to use their hands to feel an object placed in front of them; until they memorised it. Beside the object were two bags containing replica pieces with which they could recreate the object. They would then navigate their way through tracks which were set up for each of the survivors, using ropes on either side of them. They were also to meander through an obstacle course, before reaching their workstation, taking the bags one at a time. 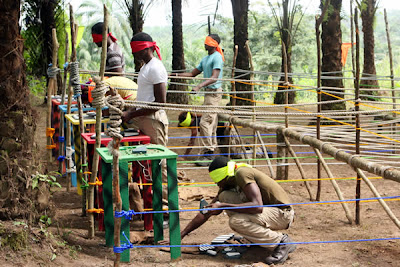 On reaching their workstations, they were to recreate the object which they had memorised. The survivors were not allowed to talk, but only to signify that they had finished by raising up their hands. Paschal Eronmose finished ahead of the pack, even before Onyinye Udodi had assembled her two bags on her workstation. Uzor Osimpka had reached her workstation before realising she did not take any of her bags along and had to make her way back to the start line.
Ifet Iniobong chose to put the pieces of the object on the ground rather than on the workstations as others did. James Adah kept praying for divine intervention while Uzor gesticulated in disbelief when told that she had not properly replicated the object.
Uzor later finished second, with James and Onyinye emerging in joint third position. Nuhu Zigwayi finished 5th, thus marking the end of Ifet’s journey on Gulder Ultimate Search. The fold over his eyes was removed and he was asked to return to camp to pack his bags and leave.
Posted by Connoisseur at 05:58