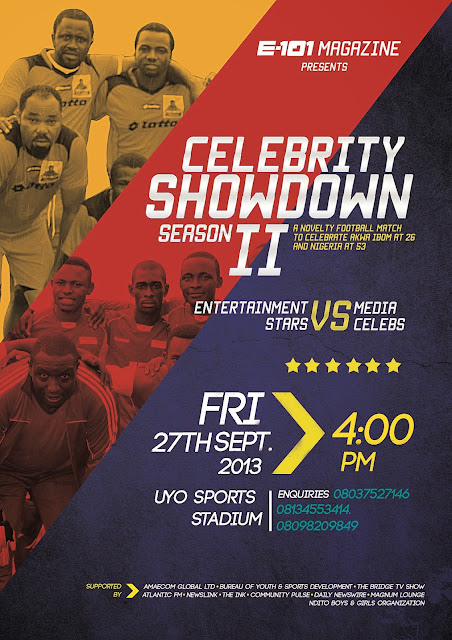 Also, in the team list submitted to E-101 Magazine board, organizers of the match, the Media Celebs team is led by prolific scorer, Iniobong Monday who is renowned sports presenter. Other top shots in the list include Nsibiet John, Essien Ndueso, Idy James and Clifford Joshua.
Below are the full lists of both teams:

The coaches will release the starting eleven of their teams an hour to the match with only 4 players (from each team) making the bench.

Injury concerns for both teams
Media Celeb’s midfield maestro, Promise Etim picked up a knee injury during the team’s Wednesday training, with doctors fearing that he may be ruled out for not less than 7 weeks. As at Wednesday, the freelance sports analyst was seen using a walking aid to support his movement. He collided with his teammate in the training and got his knee badly injured. But in a chat with this reporter, Promise who is popularly known as Mourinho said he could stage a surprising return to the pitch in the Friday, 27th September, 2013 duel. He said “I have been miraculously healed. I’m hopeful I will play the match”. He was sent a get-well-soon message by the coach of the opposing team, Mista Xto. The message reads: “I am really sorry about this injury to Promise. We pray God to help all of us to go through this without any further injury to any of us. Be strong Promise”.
Also, there is sad news for Entertainers as their number one shot stopper, Icekyd has been ruled out of the match after picking up a slight knock during the team’s Monday training.

Players and coaches talking tough
Meanwhile, they have been exchange of words and serious mind games emanating from the camps of the two teams. While the coach of the Media Celebs, Amos Etuk  said that since “the pen is mightier than the sword”, they will live up to their billings and defeat the defending champions, Mista Xto said his boys are in top spirit to dismantle the Media gurus. “PDP has ruled Nigeria for 14 years now. The same case will be for this Celebrity Showdown as will retain this trophy until it gets rusty. Yes, the pen is mightier than the sword but have you ever heard that the pen is mightier than the microphone?”, Mista Xto quipped.
The match which is organized by popular celebrity magazine, E-101 to celebrate Akwa Ibom at 26 and Nigeria at 53 will take place at Uyo Sports Stadium on Friday, 27th September, 2013 by 3pm. Entertainment Stars are the defending champions.
Posted by Connoisseur at 09:50