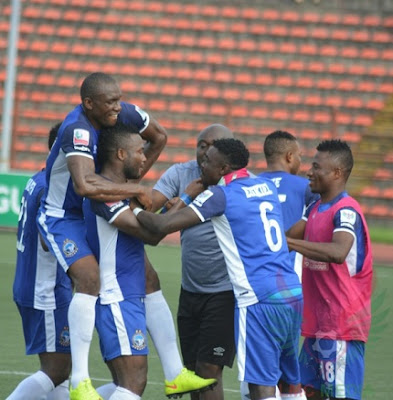 Nigeria Professional Football League champions, Enyimba, were made to work their socks off at the Yakubu Gowon Stadium, Port Harcourt by Akwa United in a Matchday 33 fixture as they had to turn to second half substitute, Ikechukwu Ibenegbu, to score the winner late in the game to earn a 2-1 win.
Mfon Udoh scored the opening goal before Hassan Babangida netted the equalizer for Akwa United just before the break to set up a finely-poised second half.


Enyimba coach, Paul Aigbogun, stuck to most of the playing personnel that defeated South African club, Mamelodi Sundowns, 3-1 in the CAF Champions League dead-rubber game.
For Akwa United, the matchday began with a tragic story of their supporters involved in a road accident while travelling to see the game.
It appeared that the Promise Keepers were in for a bad day amid the sad news of a supporter losing his life in the accident when they conceded a spot kick inside eight minutes of kickoff.
Akwa United defender, Ubong Idio, failed to stay on the goal side of the ball and could do nothing than upend Stephen Chukwude inside his penalty area, and referee Damian Akure did not hesitate to point to the spot and book the offender.
Udoh showed composure to expertly tuck away the ball past Obiowo for the opening goal of the game on 10 minutes and his first goal of the season.
Minutes later, Udoh, who holds the record as the individual with most goals scored in a single season, produced one of those moments he is known for when he glided into Akwa United's box but was stopped in his tracks before he could take a pop at goal.
Akwa United in-form striker, Hassan Babangida, came close to scoring twice and on both occasions Enyimba goalkeeper Theophilus Afelokhai was on hand to stop his attempts.
On the stroke of half time, Babangida made amends when he benefited from untidy defending by Enyimba to smash the ball past Afelokhai to equalize Udoh's early strike.
The Peoples Elephant were off the blocks faster in the restart and pinned Akwa United down in their half with their high pressing style. Aigbogun sent on two substitutes Ike ThankGod and Ibenegbu to replace injured Ugwu Uwadiegwu and Olufemi Oladapo respectively.
Aigbogun's men continued to ask all the questions in the second 45 minutes as Akwa United defended in numbers.
Eleven minutes to time, there was a little drama when Enyimba were awarded a free kick. Ibenegbu hurriedly struck the ball into the net past a surprised Obiowo and his wall of defence and as the Enyimba wheeled away to celebrate referee Akure stopped him and ordered that the free kick be retaken.
In same fashion and from same position, Ibenegbu hit the ball straight into the bottom left-hand corner of Obiowo for the winner, and this time his celebration was not cut short as Enyimba took a 2-1 lead.
Ibenegbu's goal was enough to earn the points for Enyimba and complete the double on Akwa United. The Peoples Elephant are now sixth on the table with 48 points.
Posted by Connoisseur at 15:09