Sheriff rejects another judgment sacking him as PDP chair 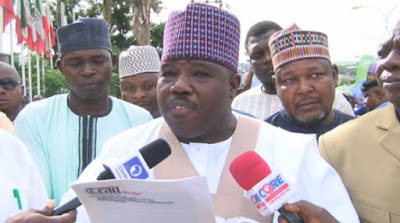 Disputed National Chairman of the People’s Democratic Party (PDP), Alhaji Ali Modu Sheriff has rejected a court judgment sacking him as party chairman. A Federal Capital Territory (FCT) High Court sitting in Kubwa, Abuja, had on Wednesday nullified his hold on the party’s chairmanship and declared his appointment as party chair null and void. But in a statement on Thursday, Sheriff said the judgment did not affect him in any way. He however said he had already appealed the judgment and filed for a stay of execution.


The judgment of the Kubwa court, delivered by Justice Nwamaka Ogbonnaya was an affirmation of an earlier one delivered by Justice Valentine Ashi of another FCT high court on June 29, 2016.
Justice Ashi had ruled that the purported amendment to Article 47(6) of the PDP Constitution of 2012 at a special National Convention of the party held on Wednesday, 10-11 July, 2014 was unconstitutional, null, void and of no effect.
Justice Ashi further ruled that the said amendment failed to comply with mandatory due process as provided in Article 66(2) and (3) of the party’s constitution.
Sheriff became chairman by virtue of the said Article 47(6) which the court nullified.
The judge had said, “By reason of the above, the purported amendment introduced in article 47 (6) on the aforesaid dates are hereby set aside.
“All persons or individuals, officers, servants and agents of the PDP parading themselves as national officers of the PDP, purportedly pursuant to the said amendment which has now been nullified are hereby restrained from further parading themselves around in those capacities and claiming the rights and privileges attached or appurtenant thereto”.
But, Sheriff’s deputy, Dr. Cairo Ojougboh who spoke on behalf of the disputed chairman, said, “When you are too much in a hurry to kill your enemy, sometimes you kill yourself. Some persons went to justice Valentine Ashi and Sheriff was not party to the case. Justice Ashi gave judgement based on what was placed before him.
“Sheriff was not a party to it and we have appealed it and asked for stay of execution. In that ruling, Justice Ashi annulled the amendment to the 2014 PDP Constitution.
“In annulling it, we go back to 2012 Constitution. In that Constitution, it is stated that when an NWC member leaves his office by virtue of death or anything, somebody from that particular zone will be nominated and appointed to complete his tenure and continue in office until the next convention. That is what happened.
“The court annulled the 2014 Constitution as amended; it does not affect Sheriff in any way. He will now stand on the 2012 Constitution. We have taken it back to the court in an appeal.”
Posted by Connoisseur at 12:50