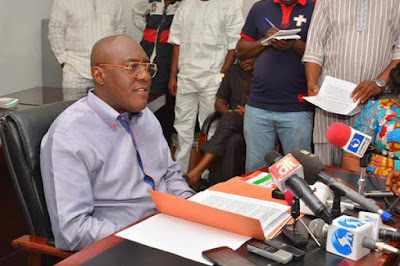 
For the avoidance of doubt, neither Chief Metuh nor his office received the figures being bandied. We therefore challenge the EFCC to substantiate that Chief Metuh received the said N1.4 billion figure as well as make public any evidence that he ever received N4 million monthly stipend from the Office of the National Security Adviser.
This office is deeply worried at the turnout of events since Tuesday when Chief Metuh was arrested and detained while fictitious figures continue to be bandied against him in the media.
Chief Metuh, as a well-known citizen and a public figure had always stated his readiness to honor any invitation by the EFCC or any agency of government for that matter on any issue regarding any allegations against him.
This office is therefore persuaded that the continued detention of Chief Metuh is ostensibly part of the plot by the APC to silence or keep the opposition spokesperson out of circulation for obvious reasons of clipping the wings of the opposition PDP.
Signed:
Richard Ihediwa
Special Assistant To
PDP National Publicity Secretary

Posted by Connoisseur at 08:30